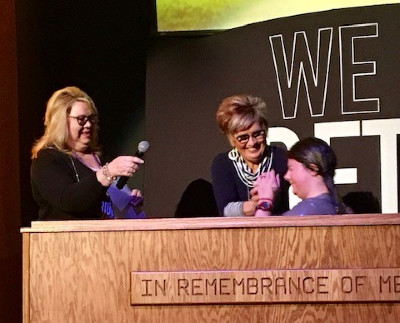 Lori Meadows baptizing one of the ladies she’s invested in.

Often derided and dismissed, they’re considered the fringe of society. In chains and often in danger, they stand in need of rescue. Made beautifully in the image of God but scarred within, they are the “least of these” and must not be ignored. That’s what Lori Meadows recognized while riding the roller coaster of emotions when her daughter was nearly swallowed up by the quicksand of drug abuse several years ago. While walking alongside her daughter, God opened her eyes to the brutal world of women suffering from addiction. In time, she and the ministry she founded called Recovery Warriors became inextricably connected to Southridge Church, the Church of God congregation in South Charleston, West Virginia. In mid-November, the church hosted a spiritually potent “Beauty Day” for the ladies of the local recovery home. The occasion was yet another reminder that these “warriors” are totally committed to giving West Virginia women a second chance.

In 2012, Lori’s daughter became pregnant soon after graduating from high school. The newborn boy was diagnosed with cystic fibrosis and the father was absent for most of the pregnancy, leaving mom to face a cyclone of internal struggles alone. An introduction to drugs made matters worse for the family, and it wasn’t long before Lori assumed custody of the child. Unfortunately, things spiraled out of control after that, as Lori’s daughter and the boy’s father not only did drugs, but also dealt drugs. Jail time and homelessness were among numerous consequences that followed, while Lori’s attempts to help only went so far. It was during this difficult time that Lori was forced to learn tough love, allowing her daughter to learn from the poor choices she was making. But after $4,000 worth of drugs were stolen from her daughter’s purse and her life was on the line, Lori’s daughter agreed to detox. 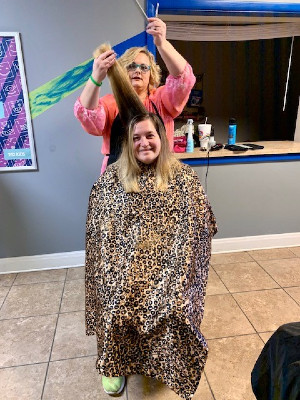 By God’s grace, Lori secured a bed for her daughter at a recovery center in Kentucky, even as a recovery center was in development in Charleston. When visiting her daughter, Lori couldn’t help but observe the approximately 120 other women in the shelter, many of whom never enjoyed the company of visitors. Lori’s heartstrings were tugged, and she began bringing candy, writing letters, and showing love in a variety of ways. As God was also working on Lori’s heart, the call to minister to women in recovery became loud and clear. Recovery Point in Charleston opened in November 2016 and since then Lori has sought to give of her time and talent in whatever ways are helpful.

“It started really small, but God has moved, and the ministry has grown by leaps and bounds,” Lori explains. “It was February 2017 when I shared my testimony with the ladies that God poured into my spirit to do a ‘beauty day’ for them. So many of these ladies (and I’m sure men are the same) feel no self-worth. Not only have they let their mental wellness go, but their physical bodies have suffered, as well. Many have medical problems as a result of the drug abuse. Many come from horrible circumstances. Listening to their stories breaks my heart, but makes me more determined to introduce them to the love of Christ—to help them see that, no matter where they come from, they can be transformed into a new creation in Christ.” 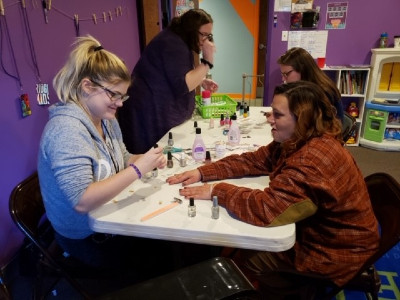 While sharing her testimony that day in February 2017, Lori couldn’t help but notice that most of her listeners hadn’t had a haircut in a very long time. Meanwhile, she was receiving compliments on her own hairstyle. “I just felt God tell me to do something special to make them feel loved and beautiful.”

This year’s Beauty Day at Southridge Church was the fourth of its kind, and it turned out to be perhaps the most powerful to date. Sure, there were plenty of haircuts, hair straightening, hair styling, nails being done, clothing being given away, and much more. But God did a powerful work to restore beauty within, too. Lead teaching pastor Scott Beha explains, “We did a short worship service to start off the day and I preached. We had a prayer room open for the duration of the event where ladies could go to respond to the message or just ask for prayer for things going on in their lives. That room had people in it the whole time, and five of them received salvation that day! The ladies were so appreciative of everything. I loved seeing the look on their faces as they went on through the day. I loved getting to see how their demeanors changed as they went from station to station to be loved on. It was one of the greatest things I have ever been a part of.” 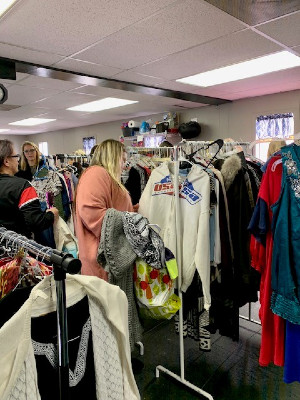 On a weekly basis, Southridge Church also provides shuttle service to and from Recovery Point. The ministry to the ladies has grown to the point that the church now offers a Sunday school class designed especially for them. The altars are full every week, numerous souls are being saved, new believers are being baptized, and lives are being changed, and families are being reunited. Lori’s daughter, too, has been transformed and celebrates four years of sobriety.

“I love the song by Matthew West, ‘Do Something,’” Lori reflects. “We can all talk about the problem, but what are we going to do to make a difference? The government can have the rehab facilities and even give grants. But they aren’t going to introduce these ladies to the God who makes all things, including recovery, possible. It’s up to the church. If more churches would break down the barriers and stigma, and go out and be the hands and feet of Jesus, lives would be forever changed.”