Saddle Up and Spread the Good News!

By chogministries
Posted May 6, 2013
In All Church of God
Saddle Up and Spread the Good News!2013-05-062013-05-06https://www.jesusisthesubject.org/wp-content/uploads/2016/07/ChogLogo-Light.svgChurch of God Ministrieshttps://www.jesusisthesubject.org/wp-content/uploads/2016/07/ChogLogo-Light.svg200px200px 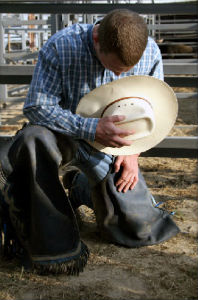 Scott Hilgendorff is called to reach cowboys. Images of the Lone Ranger and the Rifleman may come to mind, but Hilgendorff isn’t shooting for best supporting actor in the latest Western. He’s been called to share the gospel with real cowboys.

Cowboys are perhaps one of the more iconic symbols of pioneering freedom and heroism in our culture today. But the real cowboy culture, characterized by bull riders and rodeo talent, presents an opportunity that not many have taken to share the love of Christ. As these folk travel the country through the year, competing for trophies and cash prizes, their work and schedule often cloud their view of the prize after which the apostle Paul so desperately sought. To this distinct Southern demographic, the journalist-turned-Church of God-minister from Canada was called.

Having grown up in church, and introduced to the Church of God by a colleague in the newspaper industry, Scott was familiar with ministry. But it wasn’t until a vacation to the mountains of Tennessee that God started him down a most unusual path. Among the magnificence of God’s handiwork, Scott’s faith was revitalized and subsequently challenged when called upon to reach cowboys for Christ. Scott was simply bringing in a little extra cash while taking photos of the rodeo circuit—why should there have been more to it? The answer was clarified after a series of events that led him to accept the call to ministry also found him reconnecting with a young bull rider who had become a pastor. Since then, Scott has proudly taken the reins of Cowboys of the Cross.

“Many cowboys give up a lot to make it work,” Scott explains. “They give up troubled relationships because of life on the road, and often forfeit their jobs because they need to leave early on Fridays to get to events. They risk and face serious injuries, some are killed, for a chance at making it to the professional level where they can potentially make enough money to retire comfortably. Only a few make it, but thousands compete across North America.”

“These cowboys live a hard and dangerous life that takes them away from any possibility of being a regular part of a church. At the same time, cowboys and bull riders identify with Christianity as the principle faith within the industry, stemming from the days of circuit 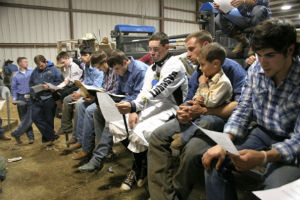 riders in America’s frontier. Bringing services to them fills a need, and most, particularly in the United States, will attend cowboy church services which are typically held before the start of the event.” From drug abuse, to questions about the Bible, to struggling relationships—Scott’s ministry addresses it all.

“Many bull riders and cowboys struggle with their rodeo/bull riding careers,” he explains. “They invest much in it with little return and can get extremely discouraged. We point them to a hope in Christ for their future.”

Scott is thankful for the work of the Church of God, as well as the support of peers in the ministry in Ontario and Tennessee. “Tennessee’s state minister, Dwayne Pierce, was instrumental in finding me a church to partner with. LifeSong Family Church in Lewisburg has been wonderful. Pastor Rocky Cunningham has been nothing but a source of encouragement.”

Scott did not grow up in the cowboy culture. But they have accepted him like family. Along this journey, the Lord has taught him invaluable life lessons. “You have to meet people where they are. One of the reasons these guys have accepted me so well is because they know I don’t judge them and that I do, in fact, care for them. You have to make time for people.” And when it comes to meeting all of your needs, Scott insists, “You have to trust God.”