Roundtable Meeting No. 2: The Quest for Unity Continues

By chogministries
Posted March 9, 2018
In The Window
Roundtable Meeting No. 2: The Quest for Unity Continues2018-03-092020-03-03https://www.jesusisthesubject.org/wp-content/uploads/2016/07/ChogLogo-Light.svgChurch of God Ministrieshttps://www.jesusisthesubject.org/wp-content/uploads/2016/07/ChogLogo-Light.svg200px200px 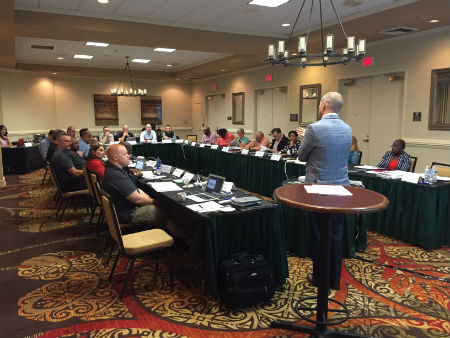 It’s a difficult task to create a synopsis of a three-day meeting in just a few paragraphs. Nevertheless, this blog post presents you with the salient points and helps keep the church informed in an open view of Project Imagine. The other roundtable members and I appreciate your prayers for us during these crucial meetings.

The roundtable for Project Imagine met together in Orlando, Florida, February 27–March 1, 2018. Prior to the meeting, an online anonymous survey of the roundtable members was conducted to ascertain the viewpoints of the twenty-nine individual members regarding the present state of the Church of God movement. The survey confirmed the belief by roundtable members that neither the current ministry trajectory, nor the current financial plan, is adequate to produce continued future growth in the Church of God movement. Responding to a question concerning groups working together to advance shared ideas as a movement, 41 percent felt we were doing “not well.” Finally, the survey revealed that a majority of people agreed with Jim Lyon’s assessment of the current reality of the movement.

The meeting was skillfully guided by Diana Swoope, chair of the Ministries Council and General Assembly of the Church of God. Ben Sand from the Portland Leadership Foundation was the outside facilitator of group process and discussion.

On the first day, February 27, members unanimously affirmed a proposal describing the current reality in the movement, and within the roundtable. To reach consensus on this statement was considered to be the first “win” for the roundtable.

The Project Imagine roundtable has gathered to explore relational and missional opportunities, pursue a common mission and vision, and determine a strategy in which a pathway and leadership approach can be identified to change the current trajectory of the Movement.

While the pathway to unity and growth is not affirmed by all, the need to change course is affirmed and should be pursued.

We listened to several proposals regarding a way forward. One-hour time blocks were reserved for various presentations and discussion. Two regional pastors presented papers describing the needs of the movement from their perspective. Discussion and clarifying questions came from the roundtable members in response. Another regional pastor presented a paper but did not field questions. General director Jim Lyon was given an opportunity to respond to questions concerning his proposal in the December 2017 meeting, and clarify outstanding or previously misinterpreted ideas. The slots of time allocated for uninhibited and open discussions around the roundtable created opportunities for significant forward movement as members shared on what were perceived to be obstacles in the path of progress. Progress at the roundtable was signaled by a mutual agreement to five general ideas that were common to the unique models presented.

The evening meal was sponsored by Florida Ministries of the Church of God and it was our privilege to have Ken Love, regional pastor for Florida, present for the dinner discussion.

On the second day, the roundtable affirmed its agreement on five key statements that will further define its work going forward. These statements affirmed the need to have stronger cooperation and collaboration between Church of God Ministries and state and regional ministries. It was agreed that the movement will be stronger as common language and vision are shared by ministry entities, and the group strongly asserted that the movement needs to be comprised of interdependent relationships that reflect autonomy while fostering accountability.

By the third morning, the wrap-up session identified two pilot efforts for the movement. These can be described as two test drives for future collaborative efforts. The entire roundtable will meet in June, working in two strategy groups, to further develop the ideas for these pilot efforts. The anticipated result will be:

The Church of God movement is deeply indebted to individuals comprising the roundtable. Many have self-funded their involvement in the roundtable, as well as investing countless hours in deliberation and time away from home, seeking to contribute to the forward-progress of the movement.