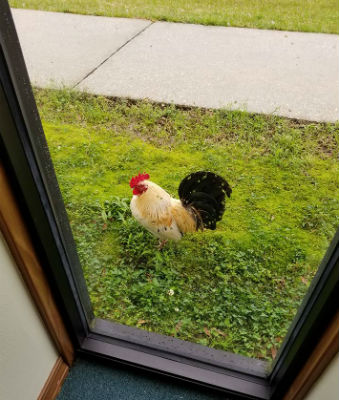 Gabriel, the rooster, just outside the church window.

You’ve heard of the angel named Gabriel. But you probably haven’t heard of Gabriel, the rooster. Since November, the fine feathered friend of Pleasant Ridge Church of God has become quite the phenom across the small city of Hammond, Louisiana. Like a guardian angel, “Gabe” stands watch Sunday after Sunday at the front entrance to the church, seemingly crowing Amens at just the right moment during Pastor Sarah Morgan’s sermons. Adored by adults and children alike, the rooster has not only captured the hearts of the congregation, but also the attention of neighbors and passersby.

It was Sunday, November 12, 2017. Less than a week had passed since the tragic Texas church shooting one state over had claimed the lives of twenty-six. Sorrow, mixed with shock, still lingered across the country, and some were flocking to church that Sunday for a word of hope. When Sarah Morgan arrived at Pleasant Ridge that morning, her eyes locked on a strange sight before her: a rooster, standing at the door. There were no other roosters or hens in the area. Knowing roosters can sometimes be aggressive, Pastor Sarah approached with caution.

The rooster didn’t attack. And he didn’t go away. Of course, he probably felt welcome to stay once they started feeding him. That could have posed a problem, but instead became a beautiful blessing. He quickly became a symbol of joy during an otherwise difficult time. The congregation began expecting him to be there each Sunday, delighted to see a familiar…beak. Once everyone was inside for worship, Gabriel wouldn’t leave the premises. In fact, he’d pace back and forth, often gawking inside as if to check in on everyone. Sometimes he can be a distraction, but Pastor Sarah says they all take it in stride. After all, Gabe’s become a part of the family. 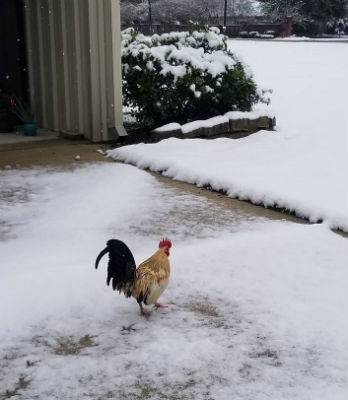 “He’s always getting his words in,” she explains. “And he loves praise and worship! We have skinny, long windows, and he sits and looks inside. I’m a nature-lover, and believe that God speaks to us through nature. I didn’t grow up in a farm, but I believe God brought this rooster to our church for joy. But what else does a rooster do? He wakes people up. And that’s been our motto for this year. Awaken. How does our church need to be awakened spiritually?”

Adding to the interest, and partial hilarity of it all, the community has taken notice. “The most amazing thing about this rooster is the way he has brought us together, not just as a church, but with our community,” Sarah explains. “The neighbors who live across the street were enthralled with this rooster. They don’t attend our church, but we do talk all the time. The man said, ‘Hey, Sarah! I’ve got some food for your rooster!’ And I’m just, like, laughing my head off about this. Who is going to go out and buy food for this rooster?! We’ve had other incidents like this, too.” 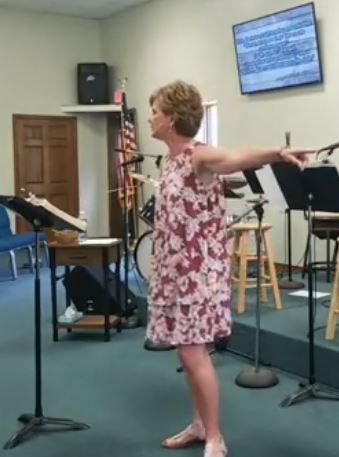 Facebook has made the “Church of God” rooster even more famous. The church’s social media stream has been home to pictures of the animal, even as the background for encouraging words of Scripture. He was also featured in a holiday post: “Merry Christmas from Gabriel!”

Pastor Sarah Morgan has shepherded the flock at Pleasant Ridge Church of God for five years. When she arrived, attendance hovered between 40 and 50. God has been on the move in the ministry there, bringing children and new families to the church. Attendance often hits 80 now, and sometimes 90. With the “Awaken” theme, reinforced by the presence of a crowing rooster, the church has taken to the streets with prayer, giving life to the community, all while congregational involvement is stronger than ever.

“I’ve really seen God’s hand at work and he is doing amazing things,” Sarah concludes. “I believe the harvest is ready in our community, and my prayer is that we as a congregation would be willing to go and reap. The most important thing is that people know Jesus loves them and wants to be their Savior and Lord.”

In Louisiana, across North America, and around the world, God is on the move in the Church of God. Join the movement. Give life. Donate today at give.jesusisthesubject.org.