By chogministries
Posted February 21, 2020
In All Church of God, Great Lakes
Risk and Reward: Churches Partner to Help County’s Homeless2020-02-212020-02-21https://www.jesusisthesubject.org/wp-content/uploads/2016/07/ChogLogo-Light.svgChurch of God Ministrieshttps://www.jesusisthesubject.org/wp-content/uploads/2016/07/ChogLogo-Light.svg200px200px 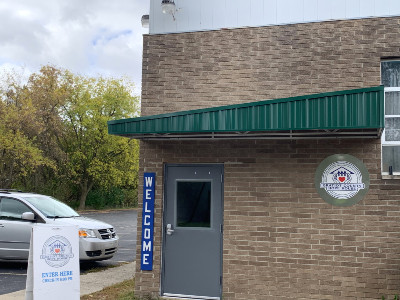 A woman approached the pastor of the local Church of God, asking if she could pitch her tent behind the building. She needed a place to stay and the church leadership had already been in discussion about how they could more intentionally be the hands and feet of Jesus. Though she stayed a little longer than expected, and one day abruptly left her tent and a mess behind, the church’s conclusion was: “Mess or not, we did the right thing.” Little did Pastor Nathan Workman and First Church of God in St. Louis, Michigan, realize that this experience would set into motion a trailblazing effort to address the needs of the county’s homeless.

“Our county is only about 40,000 people, and St. Louis is one of the smaller cities,” Nathan explains. “Homelessness doesn’t look the same in rural areas as it does in big cities. If they are homeless, they’re probably couch-surfing, they might be sleeping in their cars, or they’re pitching tents.”

Every Monday morning, the pastors of St. Louis, Michigan, gather for breakfast. Within a year of Pastor Nathan telling them about his experience with the homeless woman, the pastor of the local Nazarene church brought a similar story to the table. Pastor Nathan and Pastor Jack connected on the issue, noting that there was no homeless shelter in Gratiot County. Someone, or some ones, had to do something. Could they at least explore the possibilities of opening a shelter?

“We are both pastors of small churches—financially struggling churches,” Nathan reflects. “So, it was a ridiculous thing that two small churches would venture into this.” 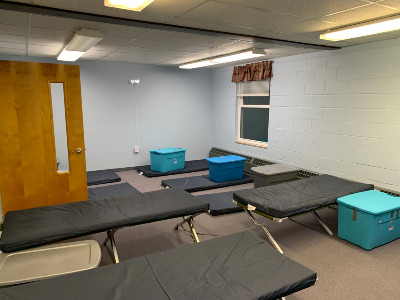 One of the sleeping rooms at Hope House.

It’s been a grueling process, but the churches pulled it off in January 2019, when they opened for eleven consecutive weeks, a trial run during the coldest part of the year, which attracted a maximum of seven guests at any one time. First Church of God is blessed with a moderate-sized building, but a quarter of the space is already utilized by a fantastic ministry to foster families. The Nazarene church therefore took the bold step of transforming what was known as their Christian education wing, not being utilized, into Gratiot County Hope House. As a partnership between the two churches, with a desire to partner with as many churches and organizations as possible in the region, the cold-weather homeless shelter is run by co-directors Pastor Nathan and Pastor Jake. Nathan primarily handles the relational end of the operation, including churches and other donors. Jake mostly deals with operations of the ministry.

Up to nineteen individuals at any given time are blessed by almost ’round-the-clock ministry, except for a break between 9 in the morning and 1 in the afternoon. A full dinner is prepared for by volunteers offsite and brought in, and breakfast is continental. From checking in guests to food preparation, to eating with the guests and providing a minimal overnight presence, volunteers are the heartbeat of the ministry, with thirteen to fourteen individual shifts to cover. This is vital to the effort, which now, in full operation, has seen the facility at or near capacity since its official opening on the second Saturday of November. It is not easy, but it is worth it. 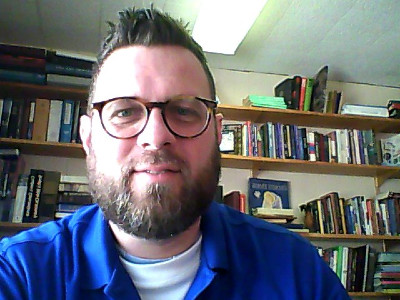 “We had to first acknowledge that homelessness is an issue in our county,” Nathan reflects. “It’s easy to ignore the issue in a rural county like ours. For instance, I’ve never seen someone sleeping on the sidewalk between a couple buildings. But the church needs to be involved in this kind of work. We’re often far too comfortable and not really getting our hands dirty. It’s easy to push the problem off on someone else in another location that many of us will never visit.”

Of the forty-plus churches in the county, Nathan explains that only a handful have literally crossed the threshold of Hope House, a fact that has been discouraging. He’s described it as a subtle resistance.

“We have said from the beginning to the pastors that your churches will not go where you refuse to lead them,” Nathan explains. “So, this has not been easy. Sure, it’s been a risk. But even if the tension remains, it has all been worth it. God continues to remind me not to limit what he wants to do. When I say no to something God is doing, I am creating a barrier to the very thing he wants to open up in my life.” 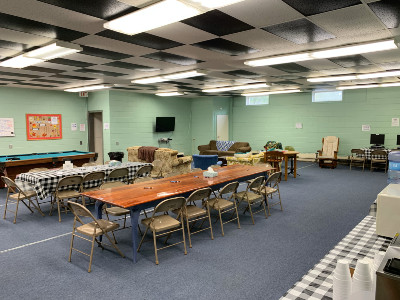 Thankfully the city has been very welcoming to Hope House and the efforts of Nathan and Jake. The rewards may never manifest as increased attendance or a material return on investment. But that’s not what it’s about for these two Michigan churches simply responding to the Spirit in obedience. From the very beginning, as Pastor Nathan puts it, they’ve chosen not so much to err on the side of caution as to “err on the side of grace.”

Pastor Nathan Workman is thankful for the opportunity to share his story with the broader Church of God, but he also welcomes those who would come alongside their efforts in prayer. “Pray that we would not become so burdened by the logistics of pulling this off,” he urges. “It’s such a huge project and it can become overwhelming. Pray that we would not lose heart in the midst of those who would say no to this project so we can continue to do what God has called us to do.”

If you have experience in ministry to the homeless and know of helpful resources for Pastor Nathan and Pastor Jake, please contact us at chognews@chog.org and we’ll relay the information to these bold brothers in Christ. They’re open to your insights. Thank you! Learn more about Gratiot County Hope House at www.gchopehouse.org. Learn more about the Church of God at www.JesusIsTheSubject.org. 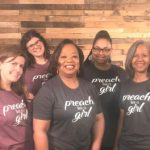