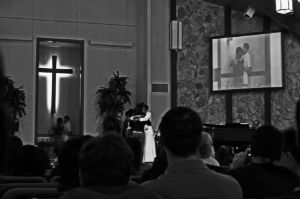 Anyone who has ever attended a past Warner University chapel would agree that Tuesday’s was uniquely different from any other. Seventy-two people were baptized by Bob Beckler, the senior pastor of South Lake Wales Church of God.

Dr. Cathy Brim was chosen in early January to speak on February 26. “I am an introvert,” said Brim. Brim knew God wanted her to speak after what had been happening on campus over the last two weeks with speakers Dr. Joseph Jennings and Chad Varga.

Brim addressed the chapel and offered an opportunity to be submerged and baptized in front of peers, administrators, faculty, and staff. A few students were quick to stand up and go forward, but it was what happened over the following 45 minutes that left many amazed, including Rodney Dallas, the director of resident life.
“Warner has never had a chapel where something like that has happened since I’ve been a student or staff here,” said Dallas.

Pastor Bob Beckler baptized all seventy-two during Tuesday’s chapel service and was intentional about speaking to each individual about what was happening. “I saw tears streaming down face after face,” said Beckler. “It was something I had never experienced before.”

Freshman Jordan Jenkins entered chapel as if it were going to be a regular service. Jenkins recalls being baptized when he was twelve years old, but after he saw several others go forward, he felt moved to go as well.

Seven beach towels were brought to chapel Tuesday morning to dry off the expected few students to go forward to be baptized. After the stage filled with teary-eyed students, church staff climbed into the attic and searched the church for towels. The service came to an end and seventy-one students and one faculty member stood along the sides of the sanctuary, wet but renewed.

You can watch the baptism ceremony on YouTube here: http://youtu.be/YpxFNTlXhmA.