By chogministries
Posted September 29, 2014
In All Church of God
Rescuing Boys from Sex Trafficking in Oklahoma2014-09-292014-09-29https://www.jesusisthesubject.org/wp-content/uploads/2016/07/ChogLogo-Light.svgChurch of God Ministrieshttps://www.jesusisthesubject.org/wp-content/uploads/2016/07/ChogLogo-Light.svg200px200px 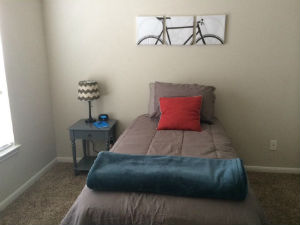 The statistics are sobering. It’s estimated that one million children are exploited by the global commercial sex trade each year. Human trafficking is a thirty-two-billion-dollar industry. But how often do we consider that sex trafficking, which affects a staggering number of young girls, also affects boys? Brent Hinkle, program director for the master of ministry program at Mid-America Christian University, has led a local church he pastors to partner with a new ministry that is rescuing boys from the sex trade.

Volunteers from Reclamation Church in Tulsa pooled their resources to purchase furnishings for a boy’s room. The room that the church then furnished, one of several which will ultimately serve as temporary housing for boys rescued from sex trafficking, now speaks volumes of the love of God.

“The home in which Reclamation Church sponsored a room is the first home in the country that specializes in housing boys under seventeen that have been trafficked,” according to The Cause International. TCI, a relatively new ministry in the Tulsa area, has identified that 50 percent of sex-trafficking victims under the age of sixteen are actually boys. The ministry focuses on opening homes for both male and female victims, including the safe house that Reclamation Church helped prepare. As the ministry grows in reach, they hope to acquire more homes beyond Tulsa to repurpose as safe houses for rescued victims of sex trafficking.

With a name like Reclamation Church, it’s no wonder the congregation is working to reclaim what hell has stolen. “Jesus obviously has a special place in his heart for children. There can be no debate about that,” Brent explains. “Too often in sex trafficking, children and teens are the ones being exploited. The result is an obvious brokenness, and the church cannot just sit idly by. Yet our small group of believers didn’t know what to do our own. Thus, when we heard about an organization that had the same heart for reclaiming lives that we did—especially in the area of trafficking, we reached out to see how we might partner with them.”

Not every church can do everything. In a recovering economy, more and more churches are strapped for resources. But Reclamation Church is not trying to do everything. Their core value of simplicity keeps them from being distracted by every pull and tug of the culture. So when they wanted to do something about sex trafficking, they chose not to reinvent the wheel.

“Currently, The Cause International is in the beginning stages of ministry,” Brent explains. “Their hope and ours is that this first home will be a success so that future homes can be established. As the ministry of TCI fulfills its calling, our hope is to stay involved—perhaps providing meals, making sure the children are well clothed, rehabbing future homes, or working alongside of TCI to provide education to our community about sex trafficking here in this area.”

Join the Church of God effort to combat sex trafficking at www.CHOGTraffickLight.org.