By chogministries
Posted March 21, 2012
In All Church of God, Colleges & Universities
Renewing Our Foundations2012-03-212020-02-29https://www.jesusisthesubject.org/wp-content/uploads/2016/07/ChogLogo-Light.svgChurch of God Ministrieshttps://www.jesusisthesubject.org/wp-content/uploads/2016/07/ChogLogo-Light.svg200px200px 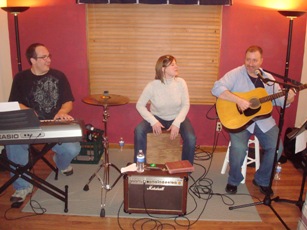 More and more young people are discovering the reformation message of the Church of God. Where are they finding it? Dale Oldham, former pastor and CBH speaker, is noted to have said, “If people do not sing great truths then those truths will soon be forgotten.” Young people are discovering these truths through song. It all began just two years ago with an idea, the means to realize a dream, and two young men at a camp meeting in central Ohio.

At the 2010 Ohio Central District Camp Meeting, worship team member Mike Parks performed one of the heritage songs of the Church of God with a contemporary sound. After the service, he and Jon Finney began talking about Church of God heritage music. Parks recalls it this way: “Jon says to me, ‘Man, I’d really like to do some of these old hymns kind of modern, you know, so that younger folks can enjoy it.’ I said, ‘That’s really interesting. I’ve got all these arrangements. But what I need is someone who’s got a recording studio,’ to which he said, ‘Well, I’ve got a recording studio.’” And so, Project Foundations was born.

While most contemporary albums contain powerful, brand-new worship songs, Project Foundations has recorded a CD that links a modern sound with the timeless lyrics of Church of God hymns. “These songs are so rich and speak and teach so much,” Parks explains. “There’s a lot we can learn just by studying our old hymns. Today we’re kind of going toward praise and worship music, and that’s good, but there’s a lot that we really need to retain from our heritage. So we tried to modernize it to bring it to where some younger folks and the newer generation might gain some appreciation for it.”

The next summer, David Sebastian, dean of the Anderson University School of Theology, was the scheduled speaker at that same camp meeting. “I met these two fellows last summer,” Sebastian recalls. “I heard them talking about Project Foundations. They did an offertory one of the evenings. I was captivated by the way they’ve taken these historic texts that were inspired by, really a lot of twentysomethings, back in the early years of this movement, who through poetry and prose and preaching, took this message of Christian unity and holiness unto the Lord out into the streets and the byways.” 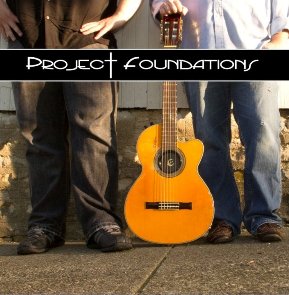 Less than a year later, AU School of Theology sponsored a gathering at which a test audience—primarily young SOT students—could hear these new renditions. The arrangements were received with much appreciation and applause. Sebastian explains his desire to host the group: “I thought, here is a couple of fellows that are very gifted, and yet they have taken a firm grip of their heritage while wanting to move it forward into today’s culture in a way that may speak to people that other arrangements did not. I value that. And also committing to a camp meeting tradition that some may feel may be troubled and on its way out—they’re saying, ‘We want to invest in that,’ and that, too, was an inspiration to me.”

Songs on the CD include favorites with a contemporary, laid-back feel, such as “A Child of God,” “The Church’s Jubilee,” “He Is Just the Same Today,” and “There’s Joy in the Lord.” Project Foundations even pulled out some classic texts that didn’t make it into the 1989 hymnal, including “Hear Them Calling,” “Come Closer to Me,” and an entirely new melody of “Are You Faithful?”

You’ll hear some modern harmonies and rhythms, but you’ll hear the traditional words. Guitars, drums, tambourines, banjo, and even mandolin compose some of the arrangements. The two musicians explored the use of sound effects on tracks such as “What a Mighty God We Serve,” on which you’ll hear the roar of wind and waves. On “The Church’s Jubilee,” you’ll hear clips of the late Harold Boyer, former minister at Maiden Lane Church of God, and Carl Reynolds, former minister at Hillside Church of God, echoing dynamic statements of faith. Parks and Finney are both fruits of their labor and current members of the Maiden Lane. They’re also quick to remind listeners that Maiden Lane was songwriter Barney Warren’s home church.

Project Foundations seeks to support their district camp meeting through the spread of their music. “Camp meetings are sometimes difficult to sustain these days,” Parks explains. “And now more than ever, the message and theology preached by the early proclaimers of the movement, expressed in inspired prose, needs to be shared with a broken world.”

For more information on Project Foundations and their music, find them on Facebook, iTunes, CDBaby, or Amazon.com, or reach them by e-mail at projectfoundations@gmail.com.