The tale of the ministry of Rev. Wilfred Jordan is one of deep and abiding love; love for his late wife of sixty-five years, Wilma Jean (Wright) Jordan, his three children, and numerous grandchildren and great-grandchildren, but most importantly his love of his Savior and Lord. This love was deepened by his academic work in receiving his master of divinity from the Anderson University School of Theology which he put to great use in his life and ministerial work.

Originally from Cleveland, Ohio, Jordan served in pastorates in Wichita, Kansas, and San Diego, California, but moved to Anderson to serve as director of international affairs for Church of God World Service in 1971. He then moved on to become the president of Bay Ridge Christian College, which was founded in 1953 to prepare African American ministerial candidates for urban and rural church work.

His love for his God lead him to volunteer as editor-in-chief of the National Association of the Church of God’s flagship publication, The Shining Light, for fifteen years, which was a glossy magazine that provided news and feature articles from across not only the National Association, but also the Church of God at-large. He not only edited, but provided between 200 and 350 articles to the magazine, including history, events, and doctrinal articles.

“He was very passionate about his love of Jesus”, his daughter Jennifer told me. “He was a very scholarly man; he did his master’s thesis on koinonia. He was very learned in New Testament Greek and would continue to write and speak well into his senior years.”

“He loved our mother dearly. She was his partner in ministry and helper, as well as serving as pianist at Sherman Street Church. They were joined at the hip, and she would do whatever she could do to support his ministry.

“As they got older, their relationship became even more beautiful. They both loved to sing the old hymns of the church. But he also had an acute sense of humor. She would add a twist to some of the songs to inject a bit of humor into their lives.

They both battled dementia, and dad took care of mother as long as he could. Three weeks prior to her departure, she said that she was, ‘Ready to go, but not ready to go.’ At that point, dad would love not only externally, but internally as well.”

Jennifer was his primary caregiver in his last four years of life. This provided some unforgettable moments to show his love for our God. “Sometimes he would awaken at three in the morning, singing at the top of his lungs, but he would be singing to the glory of God.”

Like Paul, when the time for his departure came, hospice was involved, and he would seem as if he was ready to go on to glory but would be revived three times. “He had been unconscious, and we sang and prayed with him. He had a strange blue light to his eyes. Right before he breathed his last, his entire eye became sky blue, and they were transfixed as if he had seen the glory of the Lord.”

The love story that is at the heart of the ministry of Wilfred Jordan is one that every minister, pastor, and teacher of the Word would do well to emulate. “Well done, good and faithful servant. You have been faithful over a little; I will set you over much. Enter into the joy of your master” (Matthew 25:23 ESV). 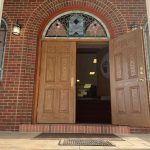 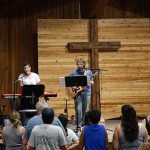