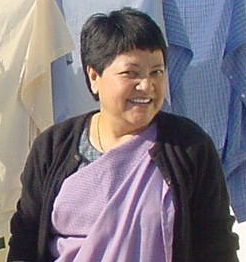 Global Ministries Group director Bob Edwards received word Thursday from Don Armstrong, regional coordinator for the Asia-Pacific region, of the passing of Rivulet Pohsngap. “Ri” was the wife of Leaderwell, and the mother of special assignment missionary to Central Asia, Donald Lyngdoh (Stephanie). She passed on September 27, 2012. Two other surviving sons include Nam and Raymond. Services will be held on Saturday, September 29 in Shillong, India. Please remember the Pohsngap family in your prayers, and the church throughout Meghalaya.

Ri was a good friend to many in the missions community. In the early 1980s, Leaderwell and Ri were missionaries from India to Kenya where they taught at the Kima Theological College (now KIST). They were a great missionary couple and integrated smoothly into Kenyan life. Ri was a quiet, sensitive, polite, yet well-informed person. While in Kenya they had the first of three children, Donald, who was named after the then executive secretary-treasurer of the Missionary Board, Donald Johnson. Little did anyone know at that time that Donald would eventually marry the granddaughter of Don Johnson, Stephanie. Stephanie is the daughter of Bernie and the late Cheryl Barton, missionaries to Japan.

“They shared many adventures together as families serving in Kenya,” Bob explains, “and I have always felt that Leader and Ri were ideal missionaries for Africa. They were a very close family, and the love of Leader for Ri was strong and lasting.” Please pray for Leaderwell, Donald, Nam, and Raymond; for their families; and for Bernie. This will be a very difficult time for them all as they adjust to being without this bright light in the family.