By chogministries
Posted December 12, 2017
In The Window
Reflections on the First Project Imagine Roundtable2017-12-122020-03-03https://www.jesusisthesubject.org/wp-content/uploads/2016/07/ChogLogo-Light.svgChurch of God Ministrieshttps://www.jesusisthesubject.org/wp-content/uploads/2016/07/ChogLogo-Light.svg200px200px 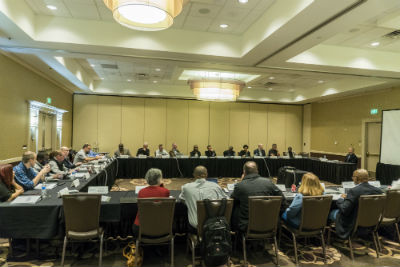 The twenty-nine-member Project Imagine roundtable had its inaugural meeting December 5–7 in Dallas, Texas. Three members were unable to participate in the entire meeting due to factors ranging from surgery to speaking commitments. We were grateful for their attendance and contribution during the part of the meeting they were present. One member, an attorney, had to miss the meeting altogether due to representing clients in a hearing. These types of schedule conflicts are to be expected when calling a large group of high-caliber leaders together.

Dr. Diana Swoope, chair of the General Assembly and Ministries Council, opened the meeting and introduced Ben Sand, from the Portland Leadership Foundation, as the outside facilitator of our meeting. Ben worked as a consultant with the Ministries Council five years ago, before Jim Lyon was selected as general director. He was introduced to the Council by Dr. Andrea Cook, president of Warner Pacific College. Ben has deeply immersed himself in a study of the history of the Church of God, as well as acquainted himself with our present challenges.

Members of the roundtable expressed their appreciation for Ben’s discernment and Christlike spirit as he guided the discussion. He opened the meeting by describing how a grove of aspen trees is not individual trees, but one living organism, completely connected and intertwined through the root system. What appears to be younger and older individual trees are connected to the same root system as the organism continually regenerates. This was his metaphor for the Church of God. We are intertwined as one organism, with many generations.

In the days before the roundtable convened, Ben sent a letter of introduction of himself and of the process. In the letter he stated,

Project Imagine will not pursue the status quo or never-ending hand-wringing. We have been chartered to be together, discern well, and propose a future plan for the Church of God’s Ministries Council and General Assembly to vote on in June 2019. This will not be accomplished by one voice or cloisters of thinking. No, our collective work is to bring diverse stakeholders together, over sixteen months, with the sole objective of building a pathway for the flourishing of the Movement we love. Our first item on the morning of December 5 will include an articulation of how we, as a group, will do that together. As your facilitating partner, I am meeting with Jesus between now and then, and I will be ready.”

As discussion ensued, it became obvious to participants that two subjects must be simultaneously pursued, like two railroad rails. We must seek and enhance trust as the first “rail,” and the second is a system or structure by which trust and cooperation can be fostered. The lack of such a structure has contributed to much mistrust in our movement.

In the days since the roundtable met, I’ve ruminated on the present realities in our movement. On page 10 of our current 2017–2018 Yearbook of the Church of God, there is a diagram showing the relationship of the General Assembly to endorsed and affiliated agencies, as well as a chart showing the general director position as the one employee of the Ministries Council who is to oversee all staff and operations of Church of God Ministries. There is no charting of the relationship of the General Assembly to any State or Regional Assemblies. It is glaringly obvious that the lack of uniform understanding of the relationship of the state or regional assembly to the national assembly does indeed promote confusion, and sometimes discord. Bringing clarity to this issue will be a major task of the roundtable.

The large group was divided into four cadres (teams) for discussing several scenarios for the future. Two scenarios were proposed by the facilitator and one was proposed by the general director. Space was also given for the cadres to propose a fourth scenario to the larger group. This will be part of the ongoing work of the roundtable.

Each of the cadres elected a chair/spokesperson for their group. These four chairpersons will be in conversation with the facilitator in preparing the agenda for the next meeting at the end of February 2018.

Natalie opened her presentation with her “love letter to the Church of God.” I share it here, with her permission:

I have had a thirty-seven-year love affair with the Church of God. If I were to write her a love letter, I would tell her that…

She has earned my devotion because of the outpouring of love she has given to me my entire life.

She has earned my loyalty because of the legacy she has built as a foundation of my life. She raised me up, and is teaching me through her people what it looks like to be a disciple of Christ.

I would tell her that she is beautiful in her reflection of Jesus to me and the world. I see Jesus in the way she breathes life into my community and my family. She pushes me forward when I am unsure, and envelopes me in love when I stumble. She’s held a safe space for me to grow, and question, and challenge, and dream.

Just like me, she is not perfect. I would tell her that sometimes she projects on me hurts from her past—a past for which I wasn’t present. That is confusing and frustrating to me.

I would tell her that I have fears that she doesn’t understand my generation and the challenges we face. Our challenges are different today than anything she has ever known. I wish we could work together to tackle them as a family.

I would tell her that I wish we could find a common language that bridges her wisdom with my fresh ideas so that we could run fast together. The world needs us, and together our light would shine brighter.

I would tell her that her beauty is not in what she used to be…but in what she can grow to be, and I think she is so very beautiful.”

I am thankful for the high-capacity leaders who willingly give of their time, energy, and financial undergirding as they participate in this process. One thing is clear: those at the roundtable deeply love the Church of God and are committed to seeing her flourish. We ask for your continued prayers for the work of the roundtable and the guidance of the Holy Spirit in this crucial, ongoing conversation. We will change the world by keeping Jesus the subject.