By chogministries
Posted February 16, 2018
In All Church of God, Give Life, Western
Reclaiming Life, Kingdom Territory in Central California2018-02-162018-02-16https://www.jesusisthesubject.org/wp-content/uploads/2016/07/ChogLogo-Light.svgChurch of God Ministrieshttps://www.jesusisthesubject.org/wp-content/uploads/2016/07/ChogLogo-Light.svg200px200px

Like the dawning of a brand-new day, the Holy Spirit is breathing new life into the Church of God in central California. Over the past five months, several structural and functional changes have been received warmly by a family of congregations seeking direction and revival. Under the leadership of their new regional pastor, Michael Guzman, the Central California Association of the Church of God has since developed strategies to increase efficiency, maximize potential, and take back what hell has stolen. The gates of hell have no doubt begun to shake, as these strategies are already beginning to bear fruit.

Michael Guzman, who also serves as pastor of the Church of God of Exeter, had served on the executive council of the region for three years. A good friend to former regional pastors Roger Chamberlain and Jerry Davisson, Michael Guzman began to feel the nudge of the Spirit when he learned the position would soon be vacated. Not only that, but he’d also seen a vision of a dome-like disc covering central California; it was as if the Lord was inviting Michael to take a direct role in helping to “lift the lid” of kingdom potential from the region. But it wasn’t so simple. Michael was not sensing release from his flock in Exeter. There was so much more to be done there, too.

“I felt like I was called and shaped to influence a wider region, but also wanted to be a practitioner in the local church,” Michael reflects. “I believe I would have been disobedient to do otherwise.”

After much prayer and consultation with his wife, his church, and association leadership, it became clear that this is what God was calling him to do. However, God was not calling Michael to frustration and burnout. Some things had to change. 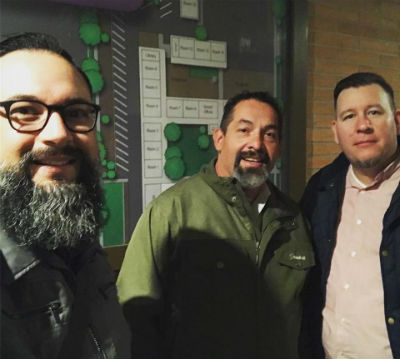 “I believe we have way more power and resourcing currently in our region than we recognize,” Michael explains. “We have doctorates, master’s degrees, counseling experience. The problem is we don’t always turn these resources back to the region…Because of technology, we can accomplish training and resourcing without traveling loads of hours to get in touch with people. We’ve got to utilize what we already have.” As such, partnership is key to Michael’s vision for the Church of God in central California. Their relationship with Youth for Christ is one example.

The Church of God congregation in Dinuba had declined. Some may have believed hell had won the battle as its doors closed. But Youth for Christ representatives had been walking by the closed church for months wondering and praying about the possibilities. One of Michael’s rallying messages for the region is “Jesus is the subject.” This means that they really can go back to their Church of God roots and reach their hands in fellowship—and partnership—to every blood-washed one. Through an agreement with the association, Youth for Christ meets there regularly through the week, but yields to the association when necessary for Church of God ministry. Part of Michael’s vision is to see a Spanish-speaking Church of God planted at that location. Central California is reclaiming what hell had stolen!

Dinuba isn’t the only community where the need for Spanish-speaking ministry is imminent. Michael explains that 60 to 80 percent of the entire area is made up of people whose first language isn’t English. First Church of God in Santa Maria is already addressing the problem with excellence by hosting a Spanish-speaking congregation in their building. Michael’s long-term vision is to see every central California Church of God do the same thing.

“The other part of that is there are so many Spanish-speaking ministers already in California or coming to California,” Michael explains. “Thankfully, Leadership Focus is becoming a prime engine for us to be able to train and equip them. But we’ve got to see more Spanish-speaking pastors raised up in central California. We’ve got to reach this demographic.” 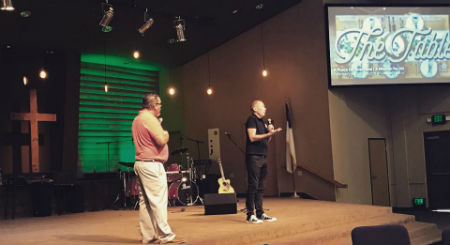 Recently Jim Lyon addressed the association, speaking life into the vision and direction of the Church of God in central California. Live translation of his message into Spanish was a feature of the occasion, as well as a demonstration of the ushering in of a new era of commitment to the Spanish-speaking community. His articulation of the “Jesus is the subject” theme and the charge to reclaim what hell has stolen has resonated very well in central California. “I’ve heard people say that the message of reclamation has been eye-opening for them,” Michael explains. “People were used to giving things away to hell, surrendering to the notion of the world going to hell in a handbasket. But now they’re saying they realize they’re supposed to be doing this stuff, that they really can take back what hell has stolen.”

Michael Guzman considers the new language from Church of God Ministries a new way of saying what we’ve always said. “I really feel like this is tapping back into Church of God roots,” he explains. “We’ve always been a relational movement, but somewhere along the lines we’ve substituted relationships for meetings. We thought we were getting the goods, but we were missing it. From the Gospel Trumpet Home, where everyone did everything together, to the traveling bands of preachers doing tent revivals, we knew each other’s stories. We trusted each other. We’ve got to get that trust back. We’ve got to re-develop those relationships.”

Thus, Michael is busy meeting with pastors, but not on Sundays; now there’s ample time to really get to know them (and he can lead at Exeter). He’s also bringing his family with him, not leaving them behind for the busy work of ministry. He’s utilizing social media and video to tell the stories of what God is doing, further connecting the interdependent family of churches. It’s a new day in the Church of God in central California, and God has only just begun to write their new story.