Reclaim 2016 Philadelphia: Grannum Addresses Movement from His Own Backyard 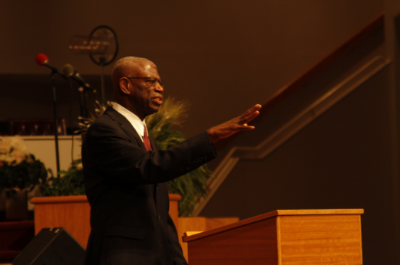 Perhaps unlike any other form of communication, stories capture our hearts. If you’ve ever heard the story of Milton Grannum’s journey of faith from a humble childhood to the prestigious leadership of one of the largest churches in our movement, you’ve surely been blessed. To hear him speak of the unlimited potential of one deposit—one seed—is nothing short of inspirational, but even more so when you’re completely surrounded by the fruit of one small seed planted in the life of a boy from Guyana. On the beautiful and expansive campus of New Covenant Church of God in Philadelphia, Pennsylvania, Milton Grannum set the tone Tuesday evening for a life-giving, purpose-renewing third-and-final Regional Convention of 2016.

Herman and Lavera Smith were two missionaries who made important deposits in young Grannum. Don and Betty Jo Johnson were two others. “I can’t even imagine who I would have become if it were not for the people who touched me,” Grannum explained. “Every time we touch someone, we do legacy evangelism. How are you making deposits in others?” 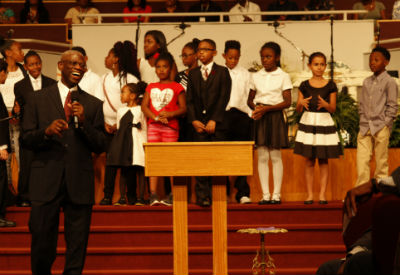 Photo: Milton Grannum and his “associates.”

Grannum knows firsthand the impact of such deposits. Perhaps that’s why he’s making similar deposits in young lives today. To illustrate, Grannum called up his crew of “associates”—his select helpers in worship and ministry at New Covenant Church—to the platform during his Tuesday night sermon. While on the platform, one of the boys offered a glimpse into the Sunday school lesson he taught at church this week. You cannot underestimate the power of investment into the lives of others. It’s what our communities need. It’s what our neighborhoods need. On Tuesday night, Milton Grannum insisted that we can reclaim our neighborhoods if we will just commit to making an investment.

Alanna Story led in worship as they did in Anderson and Vancouver. But the New Covenant worship team also surprised convention-goers with several rousing anthems. After the service, the worship team led in a song that has become the church’s theme song—reflective of their own commitment to reclaim their neighborhood. “We’re touching Philadelphia…” they sang with conviction.

An especially touching moment came at the end of the service as CarolAnn North was being commissioned by Global Strategy to southeast Asia. Moved by the unmistakable prompting of the Holy Spirit, Milton Grannum rose to announce a commitment to support her ministry, starting with a spontaneous love offering that evening. In front of the congregation he’d just challenged, Milton Grannum practiced what he preached.

So, how are you making deposits in others?