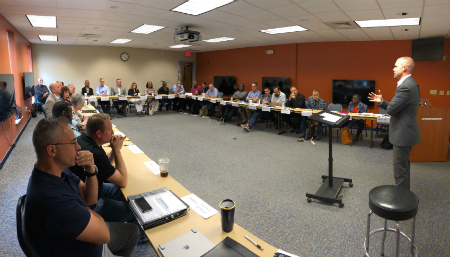 This post is another in a series of periodic updates on the progress of the Project Imagine roundtable, and is a synopsis of the third meeting, which was held June 12–14, 2018, in Anderson, Indiana. The choice of the meeting site in Anderson provided the opportunity for members of the roundtable to visit the offices of Church of God Ministries and to see the collaborative atmosphere provided by the proximity of the offices of Christian Women Connection, Church of God Ministries, Servant Solutions, and Warner Press in our new base of operations.

Anderson University hosted our meeting at the Falls School of Business facility on the campus. A majority of the roundtable participants bore the expenses of their own travel and lodging throughout the three-meeting process. This prevented the roundtable meetings from being a financial drain on the budget of Church of God Ministries. We are grateful for this financial partnership that made the roundtable conversation possible.

Project Imagine was launched after the 2017 General Assembly passed a motion by 81 percent, acknowledging that a new model of cooperative ministry across the movement should be explored. The Ministries Council brought the motion to the floor in response to a set of ideas proposed by our general director, advising that the current competitive and uncoordinated atmosphere of ministry is most likely unsustainable. Local churches across North America are being asked to fund each ministry entity, and some ministries are struggling to remain viable in the current environment. The motion called for a diverse roundtable of representative leaders to assemble and consider ideas for the future work of the Movement. The General Assembly asked all ministries and agencies to join in this exploratory process by sharing necessary data and perspective.

At the outset, some members of the roundtable entered the conversation concerned that they would be asked to rubber stamp a predetermined set of outcomes. The facilitator of the meetings, Ben Sand, made every effort to reassure the group that the outcomes were not predetermined, and that the effort was named Project Imagine in an attempt to invite imagination and creative thinking about the future of the Movement.

Eventually, the roundtable affirmed a current “reality statement” as descriptive of the belief of the group as a whole:

The Project Imagine roundtable has gathered to explore relational and missional opportunities, pursue a common mission and vision, and determine a strategy in which a pathway and leadership approach can be identified to change the current trajectory of the Movement.

While the pathway to unity and growth is not affirmed by all, the need to change course is affirmed and should be pursued.

Later, after hearing several presentations and recommendations, the roundtable affirmed that there were common elements in each of the proposals. Five areas of insight were adopted by the group in response to the presentations:

Each of the presented ideas offers unique perspectives, yet the roundtable identified important areas of agreement. Each of the ideas offered articulate need for:

1. A regional approach
2. A collaborative approach
3. Common language and vision
4. Increased interface between regional pastors and Church of God Ministries
5. Interdependent relationships that reflect our autonomy while fostering accountability

Progress in the conversation

In its third and final meeting, the roundtable divided into two working strategy groups to discuss two pilot efforts for the Movement. The intention is to recommend these efforts as “test drives” for future collaborative efforts. The purpose of the third meeting was to further develop the ideas for these pilot efforts. Extensive notes from the three-day meeting were compiled and a working document, summarizing the meeting, will soon go to members of the roundtable for their input. Once editorial suggestions are received, the document will be provided at the September meeting of the Ministries Council for further action.

1. One working group explored the formation of a Church of God networking table inviting other ministries in the Church of God movement to coordinate calendars and cooperate together in ministry approach. A recommendation will be included in the report to the Ministries Council suggesting how the group is comprised and what its function will be.

2. A second working group made progress discussing the formation of a pilot region. Several regional pastors from the West Coast volunteered to explore ways that the footprint of their region could be expanded and how these individuals could function as one team. These regional pastors were invited to be guests of the roundtable in order to expand the conversation around these possibilities.

The work of writing and formulation of these proposals is being prepared by Dr. Barry Callen, who brings a wealth of theological and historical context to this pursuit of functional unity in the Church of God. As previously mentioned, the roundtable members will have the opportunity to review and comment on the document prior to its submission to the Ministries Council.

What’s next for Project Imagine?

While the three gatherings of the roundtable are complete, the work of Project Imagine will continue. The report on the work of the roundtable will be completed in the coming weeks and will be submitted to the Ministries Council for action in September. The Ministries Council will decide whether or not the recommendations go forward to the General Assembly, or whether additional work and deliberation is needed. Should the Council decide to bring the recommendations forward to the General Assembly, and should the assembly endorse them, decisions will be needed as to who will lead the efforts of implementation.

What’s next for Bob Moss?

Beginning July 1, I will become an off-site employee with Church of God Ministries. As I assume the lead pastor role at Hope Community Church in Niles, Michigan, I will continue my responsibilities with Project Imagine, and will serve as an advancement field representative and cabinet-level leader at Church of God Ministries. My commitment to the work of Church of God Ministries is unabated, and I am convinced that being on the front lines of parish ministry will enhance my perspective and effectiveness in serving our Movement.

The Niles congregation has agreed to share me in this dual role while I work remotely and travel for the national office a few weekdays each month. I will also be onsite at Church of God Ministries for one or two days each month. The vast majority of my work with the national church is conducted on a screen or telephone, so it won’t matter much whether my desk is in Anderson or Niles.

It was my heart for pastoral ministry that led me to this decision. Renée and I have ministered as agents of healing and rebuilding in two previous pastorates, and it seems God is calling us to do it again at Hope Community Church. We’re expectantly watching to see what God has in store for this ministry. We are also looking forward to returning to Berrien County, Michigan, where we previously spent many years serving First Church in St. Joseph.