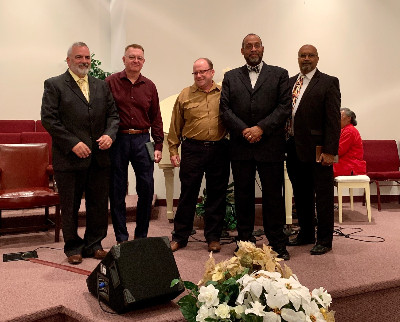 Five Church of God congregations organized and participated in revival meetings at five different locations around the Columbus, Ohio, metro area, in early October. The pastors met for over a year together and had planned to do revival differently than the traditional way, and bring hope to the greater Columbus area, which is home to 2.4 million people. Not unlike a progressive dinner, where you might begin at one location and go to a different house for each course of the meal, the pastors agreed to this kind of unique approach.

The first night’s service at Faith Community had a great message from Pastor Watts of Columbus West Church of God on the tabernacle of God. He taught how the tabernacle prefigured our relationship to God during the church age. It was a fascinating exposition of the imagery of the glory of God.

During prayer time, a young man about age six asked for prayer for a baby in the congregation named Joel, who was hospitalized with breathing problems, fever, and congestion. Pastor Watson called the young man forward, and the pastors anointed Ryder in proxy for the baby. The congregations knew the Spirit was moving that night. 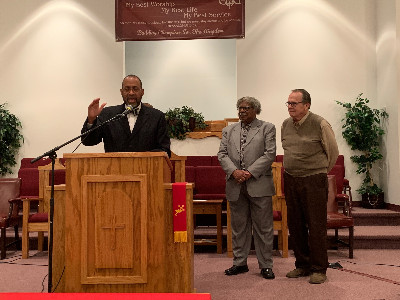 Wednesday night saw Pastor Adrian Powell preach an expository message at Hilltop Church on Isaiah 57:14–21, with the text emphasis on removing the stumbling blocks in the way of reaching friends, relatives, and strangers while, at the same time, understanding the doctrine of the sufficiency of God in our motivation for evangelism.

Pastor Iran Watson from Kimberly Parkway Church of God preached Thursday’s message at New Horizons and brought both humor and intensity to the preaching of the Word with a passage from James 1:1–15, titled “A Certain Promise in Uncertain Times.”

Pastor Dave Lewis from New Horizons Community Church closed out the revival at Kimberly Parkway Church of God with a message from John 15:1–8, “Re-Centering Your Life.” The famous passage deals with the vine and the vinedresser, and the fruitfulness of the vine.

At the end of the service, Pastor Watson honored the retired pastors emeriti from Columbus West and Columbus Hilltop, Rev. Ralph Watts and Rev. George Jordan, respectively, for their years of service to the Church of God in Ohio and the way they helped the ministers develop locally, and as mentors in ministry.

The pastor’s wives also presented them with gifts of cross pens and leather-bound journals to keep notes for next year’s revival and their ongoing work in ministry.

Adrian Powell is pastor of Faith Community Church of God in Grove City, Ohio. He has been published in the Columbus Dispatch, Columbus Call and Post, Columbus Post, and Vital Christianity. He has authored two books, The Jubilee Harvest and Resident Aliens: A Living Faith in a Hostile World, available at Amazon.com.