February has long been recognized as Black History Month in the United States—an important focus to help all Americans discover, appreciate, and understand the terrific impact and contribution of Americans of African descent to our culture, advancement, and history. Such observations are important because history books tend to highlight the achievements of those who write them (principally white men); overcoming that limited lens strengthens all of us and honors the diverse family of humanity God designed.

Similarly, women are often under-represented in the narrative of our past. And yet, all of us know that women are half the world and indispensable players in a nation’s development and success. Women are, again by God’s design, life-givers. All of us arrived on the scene only after a mother’s journey through pregnancy and delivery. And, there’s so much more.

In March 1857, a group of women in New York City’s garment district staged a protest demanding better pay and working conditions. As women, they were at the bottom of the economic ladder, with little voice and often abused. In March 1911, an International Women’s Day was established across much of the English-speaking world to highlight the stories of women who changed the world for the better, and to inspire new generations of women to reach beyond the narrow bandwidth too often assigned to them by men in the driver’s seat. It wasn’t until October 1929, for instance, that women in Canada were legally recognized as “persons” under the Canadian government’s governing charter. In 1987, the Congress of the United States, established March as National Women’s History Month (recognizing that signal protest in 1857); in 1992, Canada set October as its Women’s History Month (recognizing the history made in the Persons Case, brought to the highest court in the land). In both countries, these months set aside have highlighted the astonishing history of women across time, affirming the equality of women for the years ahead.

The Church of God has, from its beginning, been a Jesus-centered society of equals. Paul’s famous, unprecedented, and sweeping declaration in Galatians that in the community of believers, the church, we are neither “male nor female, Jew nor Greek, slave nor free,” but “all one in Christ Jesus,” has been etched in our hearts. We have, sadly, not always lived up to this high calling, but it cannot be denied that we have said we embraced it. Ours is a Movement of God’s people made possible by an army of determined, courageous, loving, and gifted women, standing at the fore, daring all who would hear to bring the Kingdom to life. Here. Now. The stories of women leaders in the Church of God are legion, if we will but rediscover them.

This month in the United States (and in October in Canada), make certain that there are women brought forward to the stage of your local church. Open your pulpit to the anointed proclamation of the Word, delivered by women (just as did Phillip’s four daughters who were evangelists in the book of Acts, or Anna the prophetess in Luke, or Mary Magdalene commissioned by the resurrected Christ himself to be the first to declare the good news of his triumph over the grave to—er, um—the men who had run away from the cross).

Who are the women in your congregation that God may be calling to the ministry of the Word? Who has he already called? Who will you find and affirm in that calling? How will we bring the prophecy of Joel, proclaimed by Peter from the Pentecost balcony, to life, acknowledging the dreams and visions and prophetic witness of both our “sons and daughters?”

Do some homework. Share the stories. Of women of God who have changed the world. Plan to do it now, as the world around us pauses to think about the role of women and society, in history and in the future. Let us, in the Church of God, be not a thermometer but the thermostat of righteous social change.

I’m a guy. I get plenty of daylight on stage. This month, this year, let’s be certain our history is written by women, too. And celebrate it. For Jesus’s sake. He does. 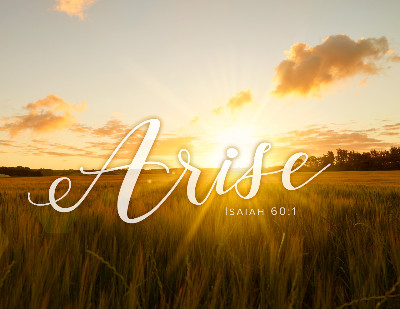 If you’d like to know more about how to engage women in ministry, contact Christian Women Connection (CWC) and explore Arise! (the initiative launched to this end last year by both CWC and Church of God Ministries). You can find more information online at www.arisechog.org.

And, this month (February) make sure you see the outstanding motion picture, Harriet, which tells the inspiring story of Harriet Tubman. Cynthia Erivo’s performance in the title role will not soon be forgotten. It’s real history. Framed by Jesus. That changed the world. A woman. A woman of color. Her story needs to be told. Like so many others.

Visit www.arisechog.org today to learn more about the Arise!-sponsored initiative, “Preach Like a Girl.” This March, we want to reinforce our support of women in ministry by asking Church of God congregations to fill the pulpit with a woman on one or all five Sundays in March. Contact Christian Women Connection at frontdesk@wchog.org or 866-778-0804 if you need speaker recommendation.

Your purchase of Preach Like a Girl T-shirts—now available—supports advocacy for women in ministry. Help us promote Preach Like a Girl by taking a picture of yourself or your ministry team wearing the shirt and post it on social media, using [hashtag] #PreachLikeAGirl. Be sure to indicate which clergywoman will fill your church’s pulpit in March!