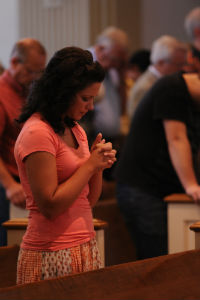 E. M. Bounds, the nineteenth century lawyer turned preacher, is well known for his unreserved passion on the subject of prayer. He notes: “God shapes the world by prayer. The more prayer there is in the world the better the world will be…” From its inception in 1878, as branch of the holiness movement, the Church of God (Anderson, Indiana) has embraced the power of prayer as a key strategy for growth. A highlight of the Global Forum was the Saturday morning prayer session.

If you missed the Prayer Summit, it was an experience shaped around three major movements consistent with the goals of the theme—the movement inward, outward, and upward. In the movement inward, individuals were asked to pray for themselves, ensuring purity before God. In the movement outward, the audience broke up in small groups and prayed for different countries, regions, and initiatives in which the church is engaged. The final movement saw intercession on behalf of the leaders of the church locally, nationally, and internationally. Finally, prayer was offered on behalf of the Global Gathering.

The Church of God has been a major medium through which God has been advancing his agenda in this world for well over a hundred and thirty years. This year’s theme suggests that if we are to be the body of Christ in a changing world, then the church has to individually and corporately increase its fervor in prayer. We are reminded of the oft-quoted prayer of Solomon from 2 Chronicles 7:14. He had just finished the mammoth task of building the first temple for the Lord. In his dedicatory prayer, he lifted up the name of God in adoration and then prayed for the people. At the end of his prayer, the presence of the Lord filled the temple and God spoke to him with clarity: “If my people, who are called by my name, will humble themselves and pray and seek my face and turn from their wicked ways, then I will hear from heaven, and I will forgive their sin and will heal their land” (NIV). These are the same sentiments echoed by E. M. Bounds on what it takes to change the world. The world will change as God’s people engage it in prayer.

On Sunday, Monday, and Tuesday, at 9:00 AM, you will have an opportunity to pray and have others pray with you. The Prayer Room is located in the Kardatzke Wellness Center, Room 157.