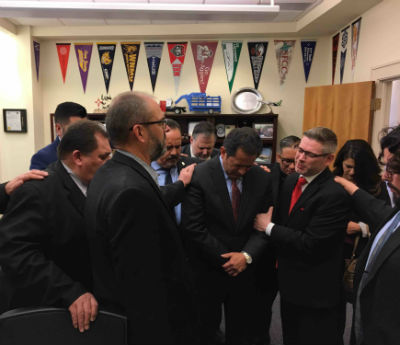 All 33 counties in New Mexico are covered. Ninety churches are participating, representing 26 cities. With Jesus as the subject, numerous denominations are represented. They’ve come together in a movement devoted to prayer, a movement which has overtaken the state. From the halls of government, to the classroom, to the streets, this prayer movement has already been proven powerful and effective. For 24 hours a day, every day, 365 days a year, they’ve set out to cover the state in prayer until Jesus comes back. One of the co-founders of what’s been dubbed “New Mexico Prays” is Richard Mansfield, senior pastor of New Beginnings Church of God in Albuquerque.

Prayer movements are nothing new to Pastor Richard. He’s been involved heavily in intercession for the community, state, country, and world for thirty-five years. In New Mexico’s largest city, Richard served for twenty years as the chairman for the local National Day of Prayer observance. Every Tuesday, he continues to meet with a group of local pastors also devoted to time spent on their knees. But two years ago, they invited a wider cross-section of pastors and Christian leaders to come together for a prayer rally. When 165 leaders showed up to the first one, and 220 came to the next one, it became abundantly clear God was up to something far bigger than they had imagined. They realized God had launched a prayer movement in their midst. And from the beginning, Pastor Richard and co-founding pastor Brian Alarid determined that this incredible thing that was happening would be all about Jesus. “It’s just like we say in the Church of God,” Richard explains, “Jesus is the subject!”

Brian then had an idea. He told Richard they needed take this thing statewide. Pastor Richard responded, “You mean, like a 24-hour prayer vigil?” Of course. Those were quite familiar to Pastor Richard. That’s more than doable. Great idea. But Brian interjected, because this had to be much bigger than that. “Think about it,” Brian said. “All we have to do is recruit 31 churches to commit to one day each month.” If you know Pastor Richard, you won’t be surprised at his response  “Dude, that’d be awesome!” 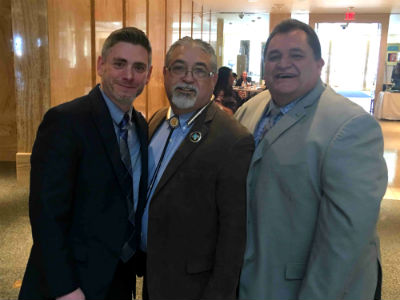 All participating churches were encouraged to pray about anything on their hearts, but asked at least to cover the following eight prayer points for the state of New Mexico:

1. For the lost to be saved.
2. For unity among pastors and churches.
3. For God to heal the land of abortion. Pastor Richard explains that Albuquerque is known as the “late term abortion capital of America.” Few other places in the country still offer abortion at nine months.
4. For deliverance from a spirit of violence. Pastor Richard describes New Mexico as the second most dangerous state in the country. Such statistics reflect annual figures on violent crime, forcible rape, aggravated assault, property crime, and burglary.
5. For freedom from substance abuse. New Mexico has more alcohol-related deaths than any other state in the country, is first in “illicit drug dependence” among those over age 11, and is second nationally for drug overdose deaths.
6. For transformation in the economy and education. With the second highest poverty rate, New Mexico is also considered 49th in education.
7. For God to break the spirit of witchcraft. Historically, New Mexico has been home to a large concentration of Wiccans and other idolatrous religions and philosophies.
8. For racial reconciliation.

As God is known to do, he blew them away with the response. Besides the staggering number of participating congregations, God has already answered the cries of his people in astounding and measurable ways. Since the movement officially began in January 2017, the state of New Mexico’s poverty rate nationally went from last place to 49th. Factors such as dropout rate put New Mexico’s education score in last place, but since 2017, they’ve moved to 49th in education, and are now graduating more high school seniors than ever before. Incremental improvements, yes, but significant improvements, nonetheless. Additionally, after only one year of statewide prayers for the state’s economy, the deficit—which accounted for a few million dollars—has turned into a three billion-dollar surplus.

Pastor Richard Mansfield and the leadership of New Mexico Prays have also developed a close relationship with government officials as the power of God is on full display. They were blessed with the opportunity, for example, not only to meet with the governor for prayer, but also share Communion with the governor and her staff. Putting legs to their prayers, the prayer movement has also begun to prepare for a giveaway of 80 thousand pounds of food and a million dollars’ worth of services to the community this summer. 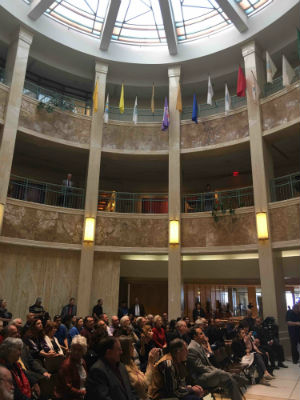 New Mexico Prays has been such a success in the Land of Enchantment that it’s starting to take hold on a national scale. America Prays is now attempting to recruit 40 thousand churches across the country to pray for a spiritual awakening. “Many states have already said they want to do what we’ve been doing,” Pastor Mansfield explains. “It’s been amazing how God is using this. God has been amazing!”

In New Mexico, across North America, and around the world, God is on the move in the Church of God. Reach our world. Donate today at give.jesusisthesubject.org.