By chogministries
Posted October 7, 2013
In All Church of God
Post-Game Party…at the Church!2013-10-072013-10-07https://www.jesusisthesubject.org/wp-content/uploads/2016/07/ChogLogo-Light.svgChurch of God Ministrieshttps://www.jesusisthesubject.org/wp-content/uploads/2016/07/ChogLogo-Light.svg200px200px 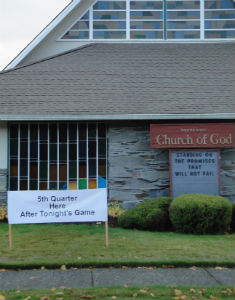 In 2011, our pastor, Marc Rice, left on a sabbatical in the summer. We believed this sabbatical could serve Marc and his family as a time of refreshing and renewal, and it could serve the church in a similar manner. A “Dare to Dream” dinner was held to help solicit some fresh ideas regarding how our church could better minister to each other, the community, and beyond. One suggestion put forth by our serving interim pastor, Dr. David New, was a “Fifth Quarter” activity to be hosted by our church after each Friday night home high school football game. Certainly the proximity of the Montesano High School campus and athletic fields lent itself well to the idea. It was a bit of an aha moment, accompanied by, “Why didn’t we think of that?”

Our first Fifth Quarter was arranged somewhat hastily with little promotion or fanfare. With some encouragement from one of the football coaches who had ties to Montesano Church of God in Montesano, Washington, about a dozen football players showed up. We stuck to the theme suggested by Dr. New—feed them, get to know them, and let them know we’re there for them.

After the next home game, following a little better promotion, some thirty to forty kids showed up. Word began to get around school and town. Montesano is a community in western Washington with a population of roughly 3,500, so it’s not unusual to run to the store for a gallon of milk and end up visiting with folks for half an hour. Everyone knows most everyone. You began to hear things like “What’s going on at the Church of God? What are they doing after the ballgames?”

With the school mentioning the Fifth Quarter in their morning announcements, at pep assemblies, and by word of mouth, we see attendance averaging in the seventies. The students, parents, coaches and school administration very much liked the idea of a safe haven where the students could hang out and get some good free food. In fact, it became a standard in post-game meetings for the coaching staff to encourage the players to head over to the Fifth Quarter. We also hosted Fifth Quarter after Friday night home boy’s and girl’s basketball games. 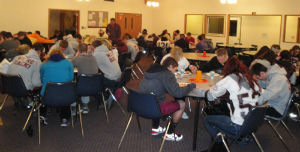 Tragically, Montesano lost several students to suicide between 2011 and 2012. Understandably, the student body and the community reeled from this. In addition, a destructive fire burned the historic wooden grandstands to the ground after Montesano’s second home game in 2012 (thankfully, no one was hurt). Built in 1942, most residents have more than a few fond memories of times spent in those grandstands. It has become evident that the Lord’s hand is ever present, even in this small-town ministry. What started as an idea has provided a stabilizing anchor for these kids in times of tragedy.

After the fire it became immediately obvious that the school would have to shift home games elsewhere. The school administration contacted Pastor Marc, long back from his sabbatical, expressing a real desire to continue to have a Fifth Quarter, with the feeling that the kids “really needed it.” And so, it was decided that even though the game would not be played just up the street, the Fifth Quarter would be held, simply pushed back thirty to forty-five minutes, allowing the kids to return to town after the game. In spite of the change, nearly eighty showed up!

While some of the kids attend church somewhere, many do not, so we have taken an approach where we ask a simple blessing on the food, our time together, and the days ahead. We end each prayer with “May God bless the Bulldogs! And everyone said…,” after which the kids yell, “Amen!” Fifth Quarter continues in 2013, and according to one student, “The Fifth Quarter is now a tradition!”

Montesano High School went on to win the 1-A state football championship in 2012.