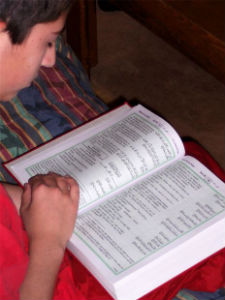 Dave and Kenneth met with the “Pernovo” congregation to discuss plans for the August youth camp. They were pleased to learn that seven youth and one adult will participate, but another blessing awaited them. Dave and Kenneth were introduced to “Ali” who shared his fascinating testimony. Born and raised in a Muslim family in Pernovo, Ali had no contact with the Christian church. At fifteen years old, the Islamic age of maturity, he devoted himself to the study of the Qur’an. Ali’s level of literacy and desire to read is quite unusual in his community. Although Muhammad recommended that Muslims also read the five books of Moses, the Psalms of David and the four Gospels, Ali concentrated only on the words of the Qur’an.

For eighteen years he tried to faithfully follow the Pillars of Islam, including daily prayers, giving alms, and fasting during Ramadan. He was especially devoted to studying the Qur’an, though in the Bulgarian language, not Arabic. In recent years he began questioning the role of Jesus as represented by the words of Muhammad. He noticed that the Qur’an stated that Jesus was sinless, the only person who had ever lived a sinless life. He began to wonder why Islam elevated Muhammad above Jesus when it was readily admitted that Muhammad had not been a perfect man. Ali wanted answers to his questions.

The Muslim ghetto in Pernovo has become a center for Islamic teaching by imams from Saudi Arabia. Currently, three of those clerics have been arrested, prosecuted and incarcerated for “hate speech” against non-Muslims. In this environment of more radicalized Islam, Ali was seeking answers about Jesus. No leader was willing to speak to him about his questions, so he returned to the Qur’an. As he seriously studied the words of the Prophet, he became convinced that Jesus is greater than Muhammad. One night as he slept, he had a vision of Jesus asking him, “Why do you follow Muhammad, and not me?” Ali awoke and prayed to Jesus to accept him as a Christian.

The Pernovo congregation has become his spiritual home. Ali has traded his devotion to Islam for dedication to Jesus. He has a passion to share this message: “Don’t be deceived. Jesus is greater than Muhammad. Even the Qur’an shows this.” Kenneth reminded Ali that, as a former devotee of Islam, he has the opportunity to reach Muslims in a way that non-Muslims cannot. Please pray for Ali, the Pernovo congregation and their Muslim families, friends and neighbors. And thank the Lord that he clearly revealed himself to Ali—not through creation, nor the New Testament, nor the witness of Christians—but through the words of the Qur’an! Is this what Jesus meant when he told the Pharisees, “If [my disciples] keep quiet, the stones will cry out” (Luke 19:40 NIV)? Who would have expected that the writings of Muhammed would cry out the truth about Jesus Christ to a Muslim man in Pernovo, Bulgaria?

Dave and Kathy Simpson serve the Church of God as missionaries for Global Strategy to Bulgaria.