Plovdiv Gathering Brings Together the Body

By chogministries
Posted July 31, 2013
In All Church of God, Global Gathering, Global Strategy
Plovdiv Gathering Brings Together the Body2013-07-312013-07-31https://www.jesusisthesubject.org/wp-content/uploads/2016/07/ChogLogo-Light.svgChurch of God Ministrieshttps://www.jesusisthesubject.org/wp-content/uploads/2016/07/ChogLogo-Light.svg200px200px 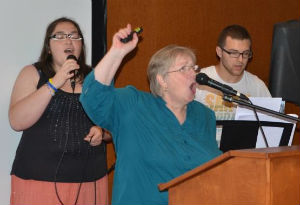 Seventy-seven people might not seem like much of a crowd, but it was a grand turnout for the Bulgarian Church of God. Folks came from eight of the nine congregations for our local Global Gathering in Plovdiv on June 22, 2013. Travel is much more difficult in Bulgaria than in North America. A journey of one hundred kilometers (sixty-two miles) can require two or more hours. The price of gasoline, over $8.00 per gallon, is a huge problem for these impoverished people. But they came from Gabrovo, Ivailo, Pazardjik, Sofia, and other towns to attend the largest unity event in anyone’s memory.

The participants were encouraged to see such a broad representation of the Bulgarian church, and also to experience a connection with believers around the world. Four guests from Germany added an international flair. In between the worship services, we had 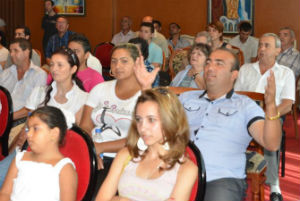 telephone conversations with brothers and sisters in Cameroon, Japan, and the United Kingdom. Folks were astounded by the audiovisual presentation that showed Church of God congregations on six continents. So many individuals commented, “I had no idea that my little church is a part of such a big body!”

In Bulgaria, the Church of God is among the smallest of the small. Statistics from the 2011 census show only 43,000 Protestant Christians in a population of 7.2 million people. The Bulgarian Orthodox Church labels every non-Orthodox church as a dangerous sect. Television advertisements warn Bulgarians to avoid contact with such heretics. It is no wonder that our believers often feel isolated and insignificant, but on June 22, everyone’s spirit was lifted.

The prevailing response that day was, “We must do this more often!” At camp, July 15–20, the young people clamored for a fall event, and a winter retreat, and a spring conference, and… Several churches are planning to gather on August 11 for a baptismal service. Indeed, the Plovdiv Global Gathering was a special event, but we pray that it will continue to inspire a desire for stronger relationships, more cooperative efforts, and increased strength through unity. Look at what the Lord did with the Twelve.  We’re looking forward to what he will do with the seventy-seven.