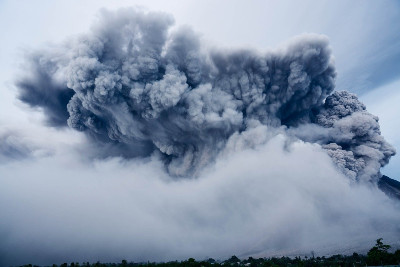 On January 12, a prominent volcano, known as Taal, erupted south of Manila. Somewhat eclipsed by major headlines since the new year, the eruption nevertheless wreaked havoc on parts of the Philippines. Even as the weeks pass and government lowers the level of alert, the harmful effects of the eruption on daily life linger. While 376,000 displaced residents were recently allowed to return home, the ash and smoke left behind remain a serious problem. Ivy Jean So, contact on the ground for the Church of God in the area, offers a brief update on the ongoing disaster and recommendations for how the broader movement can best keep them in prayer.

Ivy describes one of the locations hardest hit, an area familiar to the local Church of God, as a “ghost town.” “As for our school in Cavite in the south…it is a neighboring town to the volcano area,” Ivy explains. “Since Saturday, we’ve been getting piles of ashes all over the area. All schools and most places have been closed because of the harmful substance that’s in the air. It hurts the eyes, skin, lungs, and gets your throat dry.”

For two weeks, their school was closed due to loss caused by ash and looters. In addition to roof damage, the water tank, which had been contaminated, also had to be replaced. All this came after recent heavy rains, exacerbating an already unpleasant scenario.

The lingering effects, of what the Philippine Institute of Volcanology and Seismology reported to the Associate Press as “weak steam and gas emissions at the main crater,” are serious, though authorities have growing confidence that the threat of another “hazardous” eruption has passed. Meanwhile, thousands of residents continue to seek temporary shelter in schools and other government buildings set aside for the emergency.

Ivy elaborates: “Livelihood, vegetation and crops, and all kinds of animals have been hurt by this occurrence. Fish are dead because of the water being poisoned. The soil is filled with toxins. Power and water are cut off because of the small earthquakes and toxic contributors. Thousands have been evacuated. We’re monitoring and watching.”

Assessments of the Church of God in the Philippines are ongoing, but so are their prayers. In the midst of the disaster, these believers do their best to continue living out the calling given them by their divine Protector.

“Please pray for everyone’s safety, protection, and provisions,” Ivy concludes. “We know we have a God who is our refuge and strength, a very present help in time of trouble.”

Learn more about the international reach of the Church of God at www.chogglobal.org.