Passing the Torch: Reflections on the Legacy of Paul Tanner 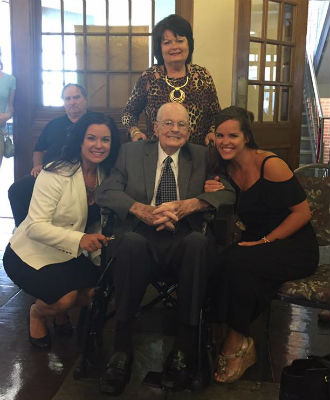 Some of the family to whom Paul has passed the torch.

Sometimes words cannot adequately express the totality of a great leader. Such is the case with Paul Tanner, who served as executive secretary for the Executive Council of the Church of God from 1979 to 1988. His family and closest friends may try to find the words, but the human lexicon inevitably falls short. Of course, Paul was so much more than a role, as Natalie Farmer, Dave Lawson, Ed Foggs, and Jim Lyon explain. Though Paul Tanner passed away on October 23 at the age of 94, the light of Christ planted in his heart is truly inextinguishable. An ever-burning torch of love and leadership has been passed on to multiple generations of those who are following in his footsteps.

Natalie Farmer is one example. She’s actively following in her grandfather’s footsteps—and therefore the footsteps of Christ. Her executive leadership at Church of God Ministries as chief financial operations officer has already proven invaluable for the organization and the movement beyond. “I was incredibly close with my grandfather,” Natalie reflects. “He modeled for me what confident, decisive, yet humble and relational leadership looks like. He had a vision for the movement and he led with humility. He was a disciple of men, a steadfast encourager to his family, friends, and colleagues, and a follower of the radical gospel of Jesus Christ.”

Paul’s oft-heard motto was, “God, grandchildren, and golf.” With his priorities straight—God and family over career and hobby—he and his wife of seventy-five years raised children who then passed their faith along to the next generation. Before his homegoing, Paul and Jean were able to enjoy together a blessing that reached all the way down to their great-great-grandchildren. It should be no wonder then that Paul’s granddaughter would exemplify his Christlike character and mission. “I’m devoting my life’s work to the same body of believers that he shared his gifts and talents with,” Natalie continues, “because I, too, believe in this movement and want to carry his legacy forward with excellence.”

Uniquely gifted. That’s how Dave Lawson would describe the person of Paul Tanner, who made an indelible impact on fundraising, unity, and values of the Church of God. But just because he points to Paul’s accomplishments and leadership abilities at the outset doesn’t at all mean he wasn’t personally touched by the godly man. It was, in fact, the opposite. Dave was Paul’s associate in the office of World Service and accomplished much together. “We were so close, closer than a lot of brothers are” he reflects. “We trusted each other. He had high expectations of all of us, and as a result, lifted my own expectation of what I could achieve, of what we could achieve. He was aggressive, but fair; organized and regimented, but creative and considerate.”

Paul’s both strong and gentle spirit gave him just the right temperament for the tasks to which God called him. From local church pastor to the Division of World Service to the Executive Council to the Christian Brotherhood Hour (now Christians Broadcasting Hope), it was apparent he was always the right man for the job. Ed Foggs, successor to Paul Tanner as executive secretary, witnessed this firsthand while he first supported Paul in that same position. “He was a colleague, a friend, and a mentor,” Ed reflects. “He and his wife were most hospitable and welcomed us for delightful and delicious meals at their home. As he was in his last days on earth, I saw him always in good spirits, never downhearted, dejected, or despondent. He was ready.” 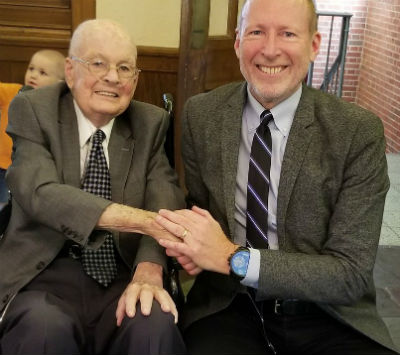 Ed explains that Paul’s legacy in the Church of God will include his willingness to listen to opposing ideas, even when he disagreed. He engaged in meaningful dialogue on matters of doctrine and practice, including the issue of glossolalia. Not only did he fundraise very well for the Church of God, he went to bat for Mid-America Christian University during a season of great difficulty at the federal level. Ed explains that Paul will be remembered for his creativity and many great ideas. Some of these ideas were even, as Ed describes, well before their time.

Jim Lyon, Church of God Ministries general director, was influenced by Paul both directly and indirectly. Present at an August 2017 ceremony at which Paul was given the title executive director emeritus and elder of the movement on behalf of the Ministries Council, Jim Lyon explains he was also spiritually formed by leaders first molded by Paul Tanner. “Paul Tanner’s reputation was first cemented as a pastor and shepherd, distinguished by his vision, discipline, and deep love for the local church,” he explains. “Paul was famed for his precision and discipline. He was smart and focused, understanding that decisions must be made, even difficult ones, from which there was no turning back. He did his homework, communicated clearly, and then stepped forward, providing anchored, sage, and inspired leadership in every responsibility he bore. At home, in the community, in the church, Paul Tanner’s model of unwavering commitment to Christ still speaks to all of us in the generations that walk after him.”

“Steady, sure-footed, calm,” Jim concludes, “Paul Tanner was, for me, a constant reminder that Jesus is Lord, the church is the Lord’s project, and we can trust him to do all things well, even when we do not. Priceless.”

Read Paul Tanner’s obituary at http://obituaries.heraldbulletin.com/story/rev-paul-tanner-1923-2017-992438771. Learn more about the Church of God at www.JesusIsTheSubject.org.