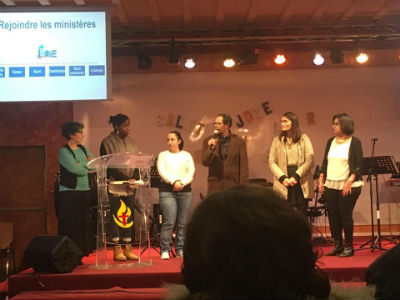 When Samir Salibi moved to Paris, France, as a twelve-year-old, non-Christian immigrant from Lebanon, little did he know that one day, two decades later, he would be coming to the rescue of many migrants and displaced people himself. But that is exactly what happened, and on December 2, members of the Three Worlds missionary team of the Church of God in Europe and the Middle East were in Paris to celebrate the first anniversary of this revolutionary new ministry.

Two years ago, Europe was suddenly inundated by refugees and migrants escaping war and poverty from throughout the Middle East and North Africa. More than 10 thousand refugees have descended on Paris, and the government has tried to place them in villages around the countries. Many first arrive in Paris and live on the streets until their paperwork can be processed. Makeshift tents adorn the streets under bridges in the Port de la Chapelle area of the city.

What started as one man’s response to the refugee crisis has blossomed into a new Church of God ministry that is pulling together evangelicals from all over Paris and other parts of France. Samir, a gifted leader in information technology and in ministry, has the ability to provide visionary leadership that can mobilize many people. Before long, there was a large crew of Church of God believers, as well as people from many other denominations and ethnicities, serving the Lord together. Samir quickly became the linchpin that held it all together and was praised by the leader of the evangelical churches in France for his superb leadership. 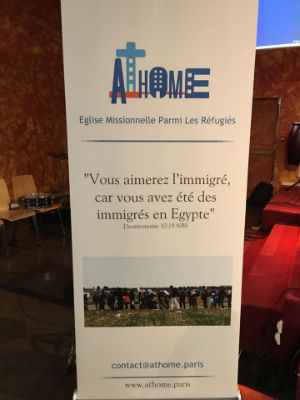 @home ministry signage at the celebration.

The ministry, which Samir called @home, is meant to convey a sense of belonging to all who are served or worship with the Christian community. The refugees and migrants may be lost and displaced, but there is always a home for them among this Christian community of faith. The government tries to provide assistance and other nonprofit groups drop off supplies on the streets. But what quickly became evident to Samir was that none of these groups were truly viewing these refugees in a holistic way—as complete people with a wide variety of needs.

Samir began to mobilize volunteers to distribute food, blankets, and items like gloves; the basic needs for survival. He then invited them to worship services where they could hear the gospel. Meanwhile, the Christian volunteers from different denominations met, planned, and worked together. Before long, Samir was offering French lessons, and other things that the refugees would need to integrate into society. But then the next step was to offer things that gave them the value and joy that we all need in our daily lives. There was a sports ministry, art and dance classes, dinners and Bible Study classes. A group from YYAM even sent a group to paint the faces of the refugees to raise awareness. Out of all of this evolved a church: @home; a church borne out of the needs of the least of these.

Sadly, Samir faced the greatest resistance from Christians who wanted to stay inward-looking, or felt threatened by the dynamism of this new ministry and new model. Samir and his family were not spared personal attacks that were very hurtful. But he was sustained by the Three Worlds team (Europe and the Middle East) that has known him for seven years and seen the high level of integrity and Christian maturity by which he deals with everything. Pastors from the United States and donors in the Church of God have lifted up Samir during the difficult times, and the ministry is now flourishing. 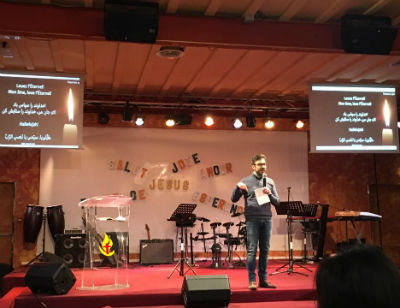 With such a large sphere of influence amongst the refugees and migrants, Samir is looking to find facilities where refugees and migrants can Samir is looking for spaces where migrants can go to church. Others are directed to evangelical churches that are prepared to integrate them. There is still a tremendous need as the 3W team found out on a recent visit when snow and cold wind fell on the poorly-sheltered people on the street. Fortunately, Samir’s church model took the church directly to the streets. Serving the people and building community is the heart of this church. By “caring for the least of these,” God has greatly anointed the @home ministry. Samir is looking for people that would like to partner with him and help support this out-of-the-box, new paradigm of ministry and church.

YOU can be a part of what God is doing in Paris. Donate online at http://chogglobal.org/mission-projects/projects-europe-middle-east/athome/ or mail your donation to Church of God Ministries, PO Box 2420, Anderson, IN 46018. Be sure to write Project 42.30501 on the memo line. Patrick and Jamie Nachtigall serve as regional coordinators for Global Strategy in Europe and the Middle East.