By chogministries
Posted May 5, 2017
In All Church of God, Western
Oregon Church Journeys with Jesus through Service, Partnership2017-05-052017-05-05https://www.jesusisthesubject.org/wp-content/uploads/2016/07/ChogLogo-Light.svgChurch of God Ministrieshttps://www.jesusisthesubject.org/wp-content/uploads/2016/07/ChogLogo-Light.svg200px200px 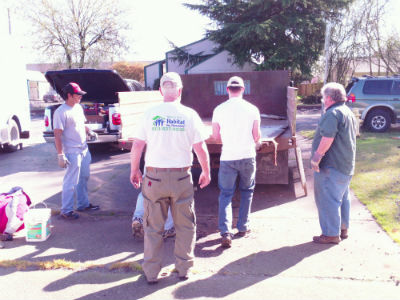 Photo: The church working with Habitat for Humanity.

“Eighth and River Street is what God has given us, so that is where we are.” Matt Ingalls reflects on the ministry of the church he has served as senior pastor for almost seven years. He’s grateful for the chance to serve where God has planted them. Sure, there may be ritzier, more glamorous ministry venues. But this is their “little slice of God’s universe,” as Pastor Matt has explained. The needs are great, and the work isn’t easy. But this church is on a journey with Jesus. For them, Jesus is the subject. Like Jesus, River Street Church of God in Newberg, Oregon, has made the people around them—not ideology, programs, or traditions—the priority.

People are their priority because Jesus made people his priority. He died for them, after all. River Street Church of God hosts a weekly supper for the neighborhood surrounding the church. They don’t just do it because it’s a nice thing to do. They do it because they believe that, if Jesus were the pastor of their church, that’s what he’d have them do. They don’t look down on the people who come in for food and shelter from the elements. That’s not what Jesus would do! Instead, they’re too busy blending into the crowd, building relationships with people for whom Christ died. 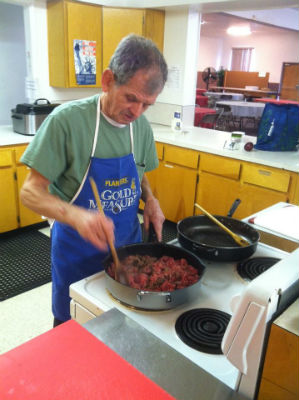 Photo: In the kitchen at River Street!

“I’ve worked with a lot of soup kitchens,” Matt explains, “and I’ve found that sometimes those doing the serving tend to take a pejorative view of those we serve, even if they don’t mean to. It’s almost like we’re here to help them because we’re better than they are.” But the “least of these” are not a project. And River Street knows that. “We serve over a hundred people, and about twenty people come from the church,” Matt explains. “But the beautiful thing is that you can’t tell who’s from the church and who isn’t.” This is because, instead of separating themselves from their neighbors, they sit with their guests. “I’m just kind of imagining through this what it would be like sitting and eating with Jesus himself,” Matt adds. “We want to be a welcoming, restorative kind of place.”

Long before “Jesus is the subject” was resonating with congregations across the country and around the world, its essence was already in the DNA of River Street Church of God. Not only do they strive to love their neighbors, but they also recognize that differences in culture, background, and the name over the door of the church do not have to cause division. Besides enjoying joint potlucks and a “pulpit swap,” they’ve reached their hands in fellowship to their Presbyterian neighbors. Fifty percent of the cost of a shower for the homeless was put up by the local Presbyterian church—even though the shower would be installed at River Street Church of God. It didn’t matter that the public would see the ongoing ministry taking place at one church over the other—for these two churches, it’s not about who sees whom doing charity. For both churches, Jesus is the subject. 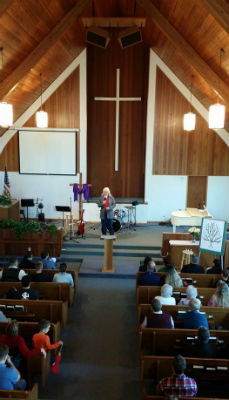 Instead of creating more programs that the modest-sized Church of God congregation would have to build from the ground up, they most often choose to partner with existing ministries that already have the ability to do community service well. The shower for the homeless, which is still in construction, is resulting from a partnership with Habitat for Humanity. Volunteers from the church will staff this ministry to the homeless a couple days a week, which will include the need for laundry. And when the needs are greater than hygiene, the church’s partnership with a local organization known as Love, Inc., will allow for simple referrals. The church also leases part of their building to another local organization providing services to family and youth. The church doesn’t mind that there’s another organization on their property, because it’s not a turf war. It’s all about Jesus’ mission, not theirs.

“We’ve been saying for a long time, even before ‘Jesus is the subject’ was the theme in the Church of God, that we want to be a community of believers striving to follow Jesus along his way,” Matt concludes. “In everything we do, we want to connect people to Jesus.”

The Upside Down Way: Following Jesus through the Gospel of Luke, a book by Matt Ingalls, was written from a “Jesus is the subject” perspective. Translating Church of God theology into practical terms and contemporary language, the book serves as an excellent resource for the church that wants to be all about Jesus in a rapidly changing culture.

In Newberg, Oregon, across the United States, and around the world, God is on the move in the Church of God. Join the movement. Reach our world. Donate today at https://www.jesusisthesubject.org/reach-our-world-fund/.