By chogministries
Posted October 1, 2014
In All Church of God, CHOG TraffickLight
OneHeart: Rescuing and Restoring Victims of Sex Trafficking2014-10-012020-02-29https://www.jesusisthesubject.org/wp-content/uploads/2016/07/ChogLogo-Light.svgChurch of God Ministrieshttps://www.jesusisthesubject.org/wp-content/uploads/2016/07/ChogLogo-Light.svg200px200px 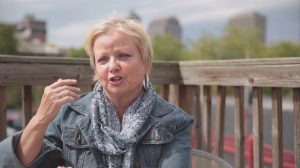 One night on an outreach, as we were serving plates of food, a young woman stopped eating, put her head down on the counter, and started weeping uncontrollably. I sat beside her as a gift of a praying presence until, between her sobs, she found her words. Brenda’s* story began to unfold.

Brenda had been evicted from her apartment. Her mother had taken the car she was living in, and both her mother and grandmother are addicted to drugs and prostitute themselves. She is providing for her two-year-old son, and she is pregnant. At twenty-one years old, Brenda found out she was pregnant a second time, shortly after the delivery of her first child. Her mother paid for her to have an abortion. Now pregnant a third time, Brenda was considering a second abortion at the insistence of the baby’s father. She had just shared that she was pregnant with him and “he said she was an inconvenience.”

Brenda’s world was falling apart, her heart was shattered, and she had nowhere to turn. She ran into the waiting arms of OneHeart and found Jesus. We encouraged her to get a pregnancy test and ultrasound with our connection at Elizabeth New Life Center. She went, and once she saw the ultrasound, she decided to keep the baby! With a generous donation from a friend of OneHeart, we were able to purchase a used car for Brenda. She moved into a new low-income apartment that we helped furnish and started a new full-timed job. And she left the sex industry! OneHeart hosted a beautiful baby shower and was there at the birth of a new little baby boy. Our hearts are full, not only because Brenda calls us each mom, but also because we are involved in the lives of her two precious sons.

OneHeart strives to reach out and genuinely love every person God puts in our path. We believe we have been called to tend to the wounded hearts and lives of those working in the sex industry. Isaiah 61:1 says, “The Lord has anointed and qualified me to preach the Gospel of good tidings to the meek, the poor, and afflicted; He has sent me to bind up and heal the brokenhearted, to proclaim liberty to the [physical and spiritual] captives and the opening of the prison and of the eyes to those who are bound.” (AMP). OneHeart gives encouragement by listening, building friendships, praying, guiding, and, most importantly, sharing the healing message of Jesus Christ. OneHeart provides professional Christian counseling and case management to appropriate services, such as drug rehabilitation, transitional job-change opportunities, and educational development. On a weekly basis, OneHeart serves home-cooked meals in strip-club dressing rooms in Dayton, Ohio.

Human trafficking is far-reaching and takes so many different forms. OneHeart is committed to addressing generational bondage of women and children caught in the sex trade. We rejoice as we impact lives, and we grieve for those swallowed up in darkness without hope. Jesus, let us be the light!

Learn more about CHOG TraffickLight and how you can get involved in the fight against sex trafficking at www.CHOGTraffickLight.org.