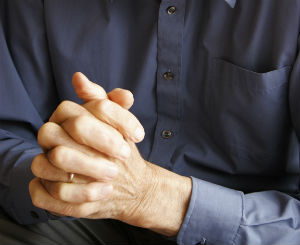 He arrives an hour and forty-five minutes before the service begins. Before even one other car has parked in the lot, he’s made his rounds, pausing at each pew. Each week, love for Christ and the church compel him to bathe the property in prayer. He’s not the pastor, and he has no degree in theology. He’s discovered that prayer is powerful, though he’s not been a Christian all that long. His name is Ed Ommert, and his story connects NAC, Christians Broadcasting Hope, and prayer walking. He is on prayer patrol at First Church of God of Middle River in Baltimore, Maryland.

When Ommert was a child, his parents made sure that the family went to church every Sunday. But the family’s façade of faith quickly crumbled after weekly services let out. In retrospect, Ommert understands that his childhood was rocked by more than hypocrisy. But it was this hypocrisy that led him to discard all elements of God from much of his life. Forty years of atheism may have kept his eyes from seeing the Lord, but as recent events have made clear, he was never out of God’s sight.

Ommert and his wife became more and more interested in spiritual matters, though not necessarily of the Christian kind. While searching for purpose and meaning, the two were led to visit First Church of God. There they discovered a power that triumphs over the dark spirits that had plagued their personal and church lives. In early 2009, they surrendered their hearts to Christ.

At First Church of God, Ommert learned what authentic Christianity is all about. While God was moving to bring new people into the church, there were some struggles. Eventually the church was left without a pastor, but amid these setbacks, the Ommerts had a sure foundation. They registered for NAC 2012 and were on their way to building bonds with believers from beyond Baltimore.

Ed and Connie were sitting in the lobby of Reardon Auditorium at Anderson University, waiting for choir rehearsal to begin, when Debbie Taylor, Global Missions Living Link specialist, approached them with a question: Would they be willing to try a prayer strategy called prayer walking?

Ommert had heard of prayer walking before. He had seen his former pastor arrive early at the church each week to physically move about the facility and pray for those who would be walking the aisles and sitting in the pews. This would be the first time Ed and Connie would participate. Their experience was beneficial for the worship service at NAC and spiritually meaningful for them.

At the CBH Retreat to the Cove in October, Debbie Taylor reunited with the Ommerts over dinner. The Ommerts shared how God used the experience of prayer walking at NAC to make a difference in their church back in Baltimore. After NAC, Ed was inspired to begin prayer walking at First Church. An hour and forty-five minutes before Sunday morning worship services, Ed arrives at church to cover the sanctuary—from pulpit to pew—in prayer. “I ask God to be with the people who will be filling the seats, to open the eyes and ears of people to receive Christ and be part of the body. I ask for God’s forgiveness and favor. I pray that people would become more like Christ. I pray for unity.”

From the witness of First Church in Baltimore, to trying something new at NAC, to a reunion during the CBH Retreat to the Cove, God orchestrated a life-changing pattern of events this year that put one man on prayer patrol and brought a story of grace and faithfulness to light.