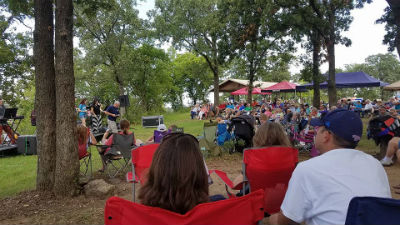 It was a beautiful day at Lake Keystone as many people set down their chairs in preparation for the event to be held. Through the collaboration of all the churches, a worship band was formed to start off the festivities with several stirring worship tunes. In addition to the worship band, volunteers from the gathered groups also helped create a choir that came together to sing several older hymns of the faith.

After the music ended, a message was delivered by Pastor Greg Reeder of First Church of God Sand Springs. This message delved into an issue far too common in the current church. The problem is people leaving the church. Greg Reeder described it as “falling off the boat.” The message ended by encouraging people to help other and attempt to bring them back into the fold. 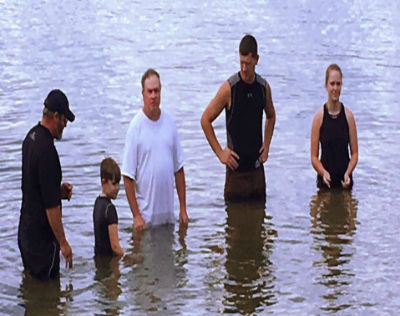 Photo: Baptism at the lake.

After this message, the churches headed down to the lake to participate in several baptisms that took place with people ranging from young to old. After these baptisms, everyone headed up to celebrate each other’s company and eat some good barbecue. As everyone was finishing their food, several events started up. There was a hymn sing at the stage with people celebrating old hymns of the faith. Some people headed down to the lake to swim and ride boats, while others played games like washers and water balloon volleyball.

In the end, local resident of Bristow, Christie Thompson, had this to say: “Having church at the lake was so relaxing and was such a blessing to me.” This Church of God day at the lake truly went swimmingly.