By chogministries
Posted October 24, 2017
In All Church of God, Central
Oklahoma Church Constructs Park for the Community2017-10-242017-10-24https://www.jesusisthesubject.org/wp-content/uploads/2016/07/ChogLogo-Light.svgChurch of God Ministrieshttps://www.jesusisthesubject.org/wp-content/uploads/2016/07/ChogLogo-Light.svg200px200px

When First Church of God in Sapulpa, Oklahoma, decided to invest in new playground equipment, they received much more than they asked for. William Wimmer, who has served as pastor of the church since 2013, was surprised when a longtime member of the congregation approached the board of trustees with plans for a park, complete with sidewalks, trees, a horseshoe pit, basketball court, soft turf, and sheltered pavilions.

“She said that because of the church’s investment in the playground, she wanted to make more out of it,” Pastor William explains. “She said that she would pay for everything above the playground. It kind of just took off from there. Construction began in May and ended in August.”

Velvetta Madden was inspired to donate when she heard that the church was dedicating funds to a new playground after their original equipment was destroyed by a storm. Once the board of trustees had unanimously voted to pay for a playground, Velvetta decided that it was time to turn the plot of land beside the church into a park for the community. “This was a totally blank piece of land. Not a single tree, no grass—it was very bland,” Velvetta says. “I stood out in the middle and said, ‘This is what I see.’ I saw sidewalks for children to ride bikes and skate on, picnic tables and benches where people can sit down and watch the children play.”

Velvetta’s design for the park was modeled after her own backyard, which often hosts gatherings for family and friends. She wanted to create a beautiful, welcoming place for everyone to enjoy friendship and community. “The younger generation doesn’t typically own big plots of land for everyone to gather,” Velvetta says. “This way, we will always have someplace to gather for outdoor activities and won’t have to depend on someone’s yard, or even having a yard.” 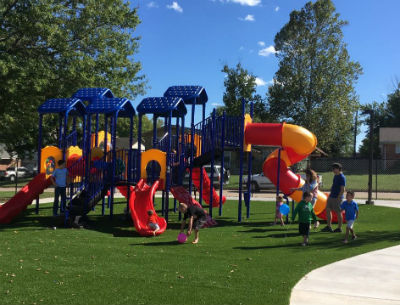 Unity Park, a gift from First Church to the Sapulpa community!

The theme of community and gathering together also inspired the park’s name. Madden was particularly moved by Psalm 133:1, which reads, “How good and pleasant it is when God’s people live together in unity!” (NIV). John 17, which also speaks of unity in the church, also served as creative inspiration for the project’s official name: Unity Park.

To illustrate the theme of community, a ramp leading into the park is decorated with footprints of all different sizes. Pastor William and Velvetta stressed that Unity Park is intended for all of Sapulpa to enjoy. “We very much encourage the community to use the park also,” Pastor William says. “We have brochures about the park, and it is always open and unlocked. We are hoping to have a community picnic at some point to say, ‘Hey, you are welcome here anytime.’”

Velvetta has been delighted to see the park already in use by children and families in the community. “We already used the park for three birthdays and three church events,” Velvetta says. “It was so fulfilling to see it done and to drive up the first time and see children playing.”

Unity Park is also currently hosting Sunday morning donut and fellowship time, as well as serving as an open area for the many children who want to run out and play before services begin.

Velvetta, who holds memories of attending Sapulpa First Church of God as a third-grader, is thankful for the opportunity to donate to a place that feels much like home to her. “That church really is my home-base church,” Velvetta reflects. “It meant a lot for me to give back.”

In Sapulpa, Oklahoma, across North America, and around the world, God is on the move in the Church of God. Join the movement. Reach our world. Donate today at give.jesusisthesubject.org.