By chogministries
Posted March 5, 2019
In All Church of God, Central, Give Life
Oklahoma Church Bursting at Seams Sees 2020 Vision Clearly2019-03-052019-03-05https://www.jesusisthesubject.org/wp-content/uploads/2016/07/ChogLogo-Light.svgChurch of God Ministrieshttps://www.jesusisthesubject.org/wp-content/uploads/2016/07/ChogLogo-Light.svg200px200px

When there’s not enough room for everyone in the Sunday school rooms and sanctuary, you’ve got a problem. But it’s a good problem to have when your church’s growth is also spiritual and healthy. The 107-year history of First Church of God in Pryor, Oklahoma, is one of vision, revision, stepping out on faith, and stepping out on faith again. Sure, there have been challenges and the congregation has faced its fair share of mountains. But God has proven himself true time and time again, revealing himself especially clear in recent years. Today, First Church of God is bursting at the seams as it celebrates steady growth from 248 to 409 over the last decade, and 27 souls won to Christ last year alone. This year, they’re seeing God’s vision clearly for all he will complete by the close of 2020.

With any plan to expand or relocate, there’s always a lingering sense of loss. What if we forget our past or lose sight of our heritage? In the case of Pryor First Church, heritage is precisely the reason they’re so confident in God’s leading. Not only has God provided in the past for all their needs, but he also prompted early leaders to boldly acquire property and expand in stages over a century of ministry. From house meetings to gathering in the production building for the local newspaper, these pioneers ultimately settled in a church that had belonged to a Presbyterian congregation. As the church grew, and space became an issue, the church embraced and funded additions to that original building.

In 2006, by faith, the church voted to purchase nineteen acres of land on the east side of town, believing that God would continue to move among his people there, that the church would continue to grow, and that relocation would ultimately be necessary. Remarkably, those nineteen acres were composed of five separate parcels owned by five different landowners. Each one agreed to sell, and to hold their price for sixty days so the decision could be brought before the congregation. Since hindsight is 20/20, the church is also doing whatever they can to honor their heritage in their new space.

“We recognize that God has moved in a mighty way for over a century at First Church of God,” Andrew Rehbein, lead pastor, explains. “We recognize that what we have today rests also on the shoulders of some incredibly visionary people who have continued to look forward and move with God’s Spirit.” 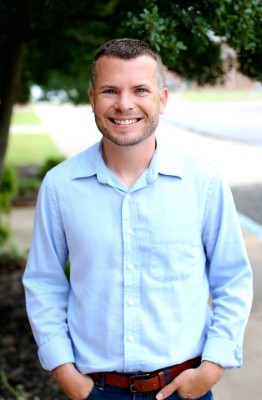 It should come as no surprise then, that plans for the new facility include spaces designed to give tribute to their history. Their coffee shop and fellowship area will be known as their Heritage Café, with graphic art showcasing images from the past. The old bell from their bell tower will also find its place suspended from the lobby ceiling for all to see, reminding worshipers that the same God who blessed their past does not change; he will also bless their present and future.

Pastor Andrew Rehbein first came to First Church as worship leader in 2003 while finishing studies at Mid-America Christian University. In 2008, he filled the vacant lead pastor role and has been leading the congregation in a Christ-centered, community-oriented direction ever since. “We were an aging congregation,” Andrew reflects, “So, to see the amount of change and ministry innovation that has happened is truly a testimony to our senior saints, who have been exceptionally willing and open to it. I feel like we’ve been intentional about honoring our heritage and valuing the investment of those who have gone before. With that are two areas of focus: truly embracing outreach, which we have called ‘living out.’ And the second is family ministry. Not just children’s ministry, but family ministry. We’re unapologetically prioritizing that in our ministry and it has been a huge aspect to reaching whole families for Christ and seeing some amazing things happen.”

Of course, the church has been incredibly faithful and generous, too. Their initial, three-year capital campaign began in 2015, garnering $1.5 million in pledges. Three years passed and their pledges were surpassed: over $2 million received and over three million in the building fund. Additionally, the total land acquired on the new site has reached forty acres. Diligent analysis of other options concluded the purchase of adjacent structures to the current building would neither be conducive nor safe for family-oriented ministry, as children would have to cross streets and alleys between worship services and children’s programming. The new site will make the stunningly beautiful new First Church of God the welcoming gateway to a growing Pryor, Oklahoma. Groundbreaking is expected this June with occupancy in the fall of 2020.

A rendering of the beautiful new facility.

But what about their old building? Serious buyers have not yet come forward, yet God has given the church a clear green light to proceed through numerous signs of his hand at work throughout the process. First Church has observed that God may not want them to sell. Could it be that he has a greater plan in mind for the old facility to be used as a hub for community ministry? A counseling center? A school for kids who have suffered trauma? A training ministry for post-incarceration individuals? God has provided the funds to relocate even without the sale of the old property. Excitement for the possible ministry uses of the old building is now on the rise.

“Just like our predecessors,” Andrew explains in the church’s campaign brochure, “it’s impossible to fully see everything God has in store, but as we seek clarity from him, by fixing our eyes on Jesus, we begin to see.”

To learn more about how First Church is conducting their building campaign and to discover what’s in store for them at their new location, visit www.see2020together.com.

In Oklahoma, across North America, and around the world, the Church of God is taking back what hell has stolen. Join the movement. Give life. Donate today at give.jesusisthesubject.org.