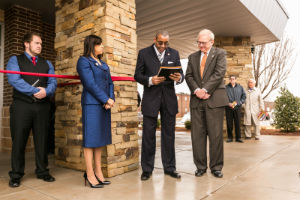 The celebration marked the completion of the 32,000-square-foot Kennedy Hall that is now home to the University Library, multiple classrooms (including three rooms that can be converted into a 150-seat conference area), a computer lab, a physics lab, and faculty and staff offices. 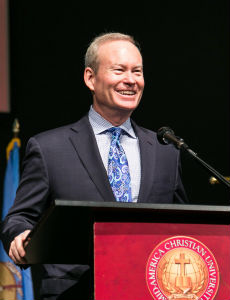 Chamber of Commerce, President and CEO Elaine Lyons and Chairman Matt Hinkle; and  Dr. Elton Kennedy, who contributed the lead gift for the project, along with his wife Ann.

Mayor Cornett called Mid-America’s 1986 move to Oklahoma City from Houston “an act of faith” considering the economically turbulent days of that era. Cornett stated that “[Mid-America] in many ways reflects the growth of our community.”

Mid-America Christian University has grown more than 200% in just the last six years alone and Kennedy Hall was built to help address the growing student population which is nearing 3,000 students.

Cornett called the dedication of Kennedy Hall a “special day for Oklahoma City,” and thanked the Kennedy family for their gift saying, “This is an extremely generous contribution to Oklahoma City. But it also represents faith and hope in this university … to grow and continue to preach the name of God.”

Mid-America Board Chair Rev. Claude Robold, who is also an alumnus of the school, also participated in the dedication. He shared with guests that the university is currently celebrating its 60th Anniversary as an institution of higher learning.

Robold said, “We did not set out intentionally to dedicate a new building during our 60th year—nor to break ground for a new Residence Hall, for that matter—but now it seems appropriate that we are doing so.”

Robold shared several highlights from the history of the university including how President John Fozard led a significant financial turnaround at the university.  Between 1999 and 2006, Fozard, the Board of Trustees, and numerous key individuals, helped vanquish $17 million dollars of debt—and the university has remained debt free to this day. In fact, Kennedy Hall was constructed debt free.

President John Fozard reminded attendees in the packed Chapel Auditorium that exactly 15 months to the day had passed since Mid-America broke ground on the project. Kennedy Hall was the first new construction for the school since 1996.

To meet the needs of the growing campus community, Mid-America launched the “Building a Greater Campus Experience” campaign.  Fozard explains, “Kennedy Hall is very much a part of this campaign, as is the renovated Student Center, and new Residence Hall that is scheduled to open in the fall of 2014.”

Fozard said that constructing two buildings back-to-back is similar to having two children born just a year apart. “It’s a great deal of work, but it is also tremendously exciting to see the growth and expansion of the MACU campus community,” he said.