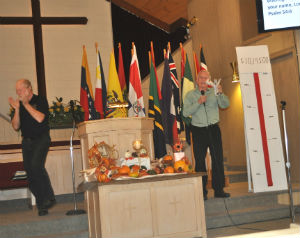 New to the church, one member of a northeastern Ohio congregation wanted to know what would happen to offerings designated to missions. One Sunday, this congregant approached the treasurer, whose blank stare indicated unfamiliar territory—the church had no mission account. Discussion about the faith promise concept followed, and as a result, a faith promise week was scheduled for the fall.

Simon Road Church of God in Boardman, Ohio, would spend the summer in spiritual and logistical preparation for faith promise. Ron Baker, former Church of God missionary to Tanzania, serves the church as associate pastor of reconciliation and outreach. He helped to teach the congregation that faith promise is a “covenant between the individual and God to faithfully return to God unexpected funds in support of a mission project.” Some churches designate faith promise funds to missionaries or special projects, like CHOG TraffickLight. In the case of Simon Road, the special missions project was determined in advance to fund a child-tutoring project at a church in the Dominican Republic. A baseline goal of $5,000 was set, with a challenge goal of $6,500. 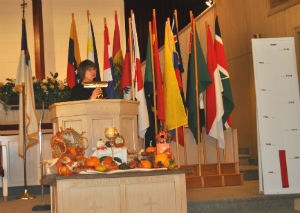 When Faith Promise Sunday came and the commitments were tallied, Simon Road Church of God discovered the fruit of their faith: $10,114! The people of Simon Road had pledged more than double their goal, and the atmosphere was nothing short of electric. “It was an awesome moment as the ribbon reached our faith promise challenge level and then continued to rise,” Ron reflects. “There was praising and shouting, and some dancing!” Senior Pastor Eddy Howard was moved by the spirit in the room, as well. He reports, “The excitement was through the roof!”

Leading up to Faith Promise Sunday, the church constructed a giant thermometer to measure the success of the campaign as commitments were counted. This congregation had never seen a giant ribbon representing giving pledges made in faith. They hadn’t ever before witnessed a parade of flags setting the tone for a global worship service. They had never had the blessing of hearing special speakers, such as Kathi Sellers of Global Missions and the Fullers of Wycliffe Bible Translators, share stories of God at work around the world. Though the entire experience was new for Simon Road Church of God, their faith and acceptance of the Spirit’s challenge rivaled that of longtime missions churches. “There was a moment of ‘How can this be?’ And then you knew God was there and was moving in the lives of the people,” Ron explains. 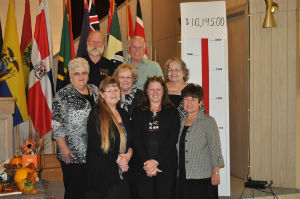 just the culmination of a week of missions activities and a summer of prayer, preparation, and pre-event giving that yielded an unexpected $1,880. The day before the grand celebration, the church hosted Lay Ministry Boot Camp, featuring guest speakers, including Kathi Sellers, Jeff Jenness, and Ron Fowler. Though this leadership training was not originally scheduled to correspond with the church’s Faith Promise week, there’s no doubt that God knew what he was doing when the two events came together.

Simon Road had selected the dates for the faith promise event prior to the opportunity to host the boot camp. Initially, they considered changing the date of faith promise. But now they rejoice in the guidance of the Spirit. “I believe this opportunity for our congregation prepared us for our faith promise commitments and paved the way for our great celebration,” Ron explains. “In the first place, we had great participation, with twenty-three registered from our congregation of fifty. The finance and discipleship tracks dovetailed beautifully with our emphases on mission. I cannot say enough about the great ministry that Kathi and the whole boot camp gave to our congregation; every comment was positive as we were challenged.”