By chogministries
Posted October 20, 2021
In All Church of God, CHOG
Ohio Church Expands Reach through Music, Food, and Family Fun2021-10-202021-10-20https://www.jesusisthesubject.org/wp-content/uploads/2016/07/ChogLogo-Light.svgChurch of God Ministrieshttps://www.jesusisthesubject.org/wp-content/uploads/2021/10/faith_community_grovecity_oh_congregation_previous_singspiration_adj-e1634738339160.jpg200px200px

I have just passed my four-year anniversary as pastor of Faith Community Church of God in Grove City, Ohio. One of the challenges when I came was that the church had no identity in the community. It became our goal to raise the profile of the church and help it become more community-oriented.

We began the first year by hosting a “Singspiration” for the community, mainly with talent from our sister churches in the area and a contemporary southern gospel group as the headliner. The following year, we expanded advertising by online and traditional newspapers, as well as 800 mailers. The event netted us an additional twenty names for our database of persons we have touched in the community. 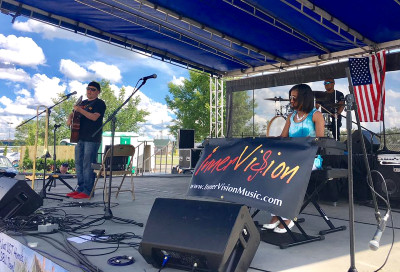 After a one-year delay due to the pandemic, Faith Community Church of God returned to the roundabout this year at the intersection of Alkire and Demorest with a more varied, diverse, and much wider range of talent for our 2021 Singspiration. The headliners this year were the duo known as InnerVision. The impetus for the act came from the contacts that my wife, First Lady Sheryle Lynn Powell, gleaned from her years as executive director of one of the larger broad-based community arts organizations in Columbus.

InnerVision was formed by a pair of life-long friends Genene Blackwell (keyboards and vocals) and Sam Shepherd (vocals, harmonica, trombone, guitar). Since 2009 this internationally award-winning band and Nashville recording artists have brought joy and inspiration through music to thousands with both live performances, as well as through their self-titled debut CD. The most interesting part of their story is that they have both been blind since their early days of life, as both were premature infants.

Since forming in high school, InnerVision has been entertaining audiences of all sizes and ages all over Ohio and beyond, with quite possibly the most diverse song lists of any professional musicians in central Ohio. Besides gospel and worship music, they also performed standards and blues, but they are both committed Christians who know the One gave them their talents. They have played over 100 engagements in the last year.

Joining them from the Dayton area was Rich Jones. Rich has been writing and performing comedy for over twelve years as he brought his clean comedy act to the west side of Columbus. Being able to do the same routine at a comedy club on Saturday night and a church function on Sunday is a pretty special but rare talent. Rich has never compromised his desire to perform only clean comedy. 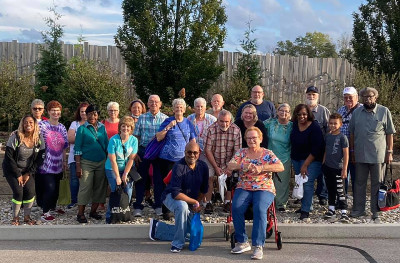 Several of the congregation on a recent fellowship outing (Pastor Adrian Powell at front-center).

One observer said, “It seems like everyone is a comedian on the internet these days. Rich is real-life standup comic though, and a funny one, too!” Another said, “Rich has the kind of humor that makes you laugh and think at the same time.”

Pianist Roxann Reid from Hilltop Church of God in Columbus did a superb job accompanying groups from area congregations that also performed selections that day.

There were a variety of food trucks available to the community with excellent choices of both Mexican and American food, as well as an ice cream truck. Additionally, the Jackson Township Fire Department had an engine available for local children and youth to explore.

We have expanded our reach and have added a Hispanic family as a result, as well as several families who have begun to visit stemming from the diversity of leadership at the church. We hope to expand our family even deeper into the community in the future.

Adrian Powell is an associate editor with Church of God Ministries and serves as senior pastor of Faith Community Church of God in Grove City, Ohio. He has been published in numerous periodicals, newspapers and blogs, and has authored two books—The Jubilee Harvest and Resident Aliens: A Living Faith in a Hostile World, available at Amazon.com. 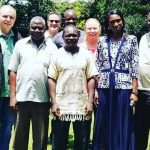 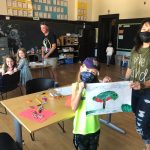