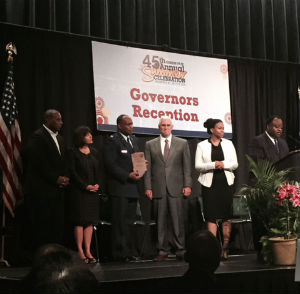 “Receiving this award has been a humbling experience,” said Obadiah. To Obadiah, being recognized by the governor of Indiana was an indication that “military chaplain ministry is far reaching beyond the scope of the military.” He continues: “It’s an accomplishment not only for me, but for my family, military career, and for the Church of God.” 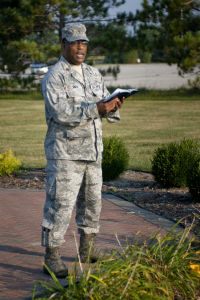 Lt. Col. Obadiah Smith Jr is the Air Force Wing Chaplain attached to Grissom Air Reserve Base in Kokomo, Indiana. He received a BA in sociology from Azusa Pacific University, a masters of divinity degree from Fuller Theological Seminary, and an MBA from Anderson University. He is extensively involved with Church of God Ministries and the Air Force. As an ordained minister with the Church of God, Obadiah has held several administrative positions at the Church of God offices such as project coordinator of Compassionate Ministries; fund development officer, and US ministries coordinator; he has been previously employed as associate director for strategic partnerships with World Vision. His international experience includes travel, program development, teaching, ministry and consultancies in the US, Africa, Europe, Brazil, Romania, Sri Lanka, Haiti, Turkey, and Hong Kong.

Obadiah says that his call to ministry in serving the military population was “inspired by growing up as a military child in the Air Force. I lost my biological father at the age of twelve from a massive heart attack. My mother married my stepfather who was in the US Air Force Security Forces (military police).” He continues to assert that: “The past eighteen years have been a delight to serving a population that is often forgotten within the confines of traditional ministry. The military community warrants attention; therefore, due to my experience as a military child, I wanted to cross over into the unknown to serve others.”

In terms of future plans, Obadiah is currently trying to enhance his ministry by pursuing his doctorate in ministry in biblical reconciliation from Anderson University’s School of Theology. He also entered a two-year correspondence course at Air War College in an effort to promote to Colonel someday. “The coming years will be very intense, but promising as I continue to continue to seek God’s purpose in my life.” Obadiah concludes.

Linette Tang is a communication intern for Church of God Ministries from Anderson, Indiana; and Singapore. She is currently studying math, computer science, and writing at Anderson University. Learn more about Church of God Chaplain Ministries at www.JesusIsTheSubject.org/chaplain-ministries.