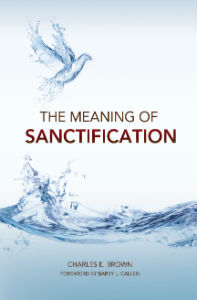 Francis Asbury Press, the Wesleyan academic imprint of Warner Press, Inc., has published a new edition of The Meaning of Sanctification, by Charles E. Brown. First published by the Gospel Trumpet Company in 1945, the book has become a staple of theology courses at Wesleyan colleges throughout North America.

Dr. Brown served as editor in chief of the Church of God publishing house throughout the decades of the 1930s and 1940s. “In a time when many were suspicious of formal education, Brown studied Greek, Latin, Hebrew, and German, making him a ‘liberal’ in some eyes,” Barry L. Callen writes in the foreword to this edition. “He encouraged the Church of God movement to reconsider itself within the fuller spectrum of the history of the broader church.”

The Meaning of Sanctification best demonstrates Brown’s view of the movement’s place in Christian tradition. He quotes early Church Fathers, leaders of the Protestant Reformation, and theologians of the Enlightenment on his theme of personal holiness. This gives his textbook a unique place among books on sanctification, because it is a book of historical theology as well as biblical exposition.

Click here to purchase the new edition of Dr. Brown’s book at the Warner Press website. A discount of 30% is applied to orders of six copies or more.