Early 2020 was a dire time for many Americans, and the widespread economic shutdowns that left a lot of people struggling prompted one Church of God congregation in Riverside, California, to step up.

“We’ve always had a way for the homeless to come by and pick up food,” said Eric Denton, lead pastor at Central Community Christian Fellowship. When COVID hit, Denton and his staff could see the effect on nearby families who had lost jobs or been furloughed. But, for three months, even as the need grew, food banks were shut down. Riverside stepped into the void.

“In mid-July of 2020, we arranged a food giveaway just for senior citizens, and the next week opened it up for everyone,” Denton said. They outgrew a walk-up setup quickly and shifted to a drive-through operation as the pandemic continued. Even that was “small potatoes” compared to what would happen next.

“When the pandemic struck, we had no idea when we had our first little giveaway that it would be happening for months to come, or a year-and-a-half to come,” Denton said in one of his weekly Facebook Live broadcasts voiced as he walked around the church property showing dozens of vehicles lined up to get a laundry basket full of perishable and imperishable foods. “And the friends who bought us the forklift—what a wonderful gift this has been; we use it nonstop,” he added as his camera shows the forklift. 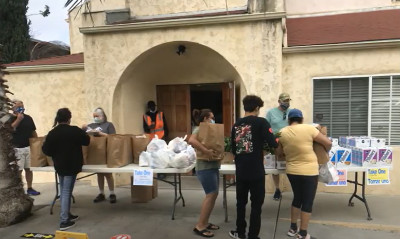 The church’s large drive-through food giveaway began from simple beginnings in summer 2020 as a walk-up arrangement with portable tables and paper sacks of groceries.

As it became clear this giveaway was growing fast, others stepped up to help. Denton explained that Saddleback Church called, said, “You are going to need a box truck,” and provided one that is now used several days each week to go gather food donations for the upcoming Wednesday distributions. More recently, the church added a forty-foot refrigerated container on their property because the children’s Sunday school rooms and the chapel space normally used by the youth were filled to overflowing with stored foodstuff, about which Denton said, “We were storing stuff in refrigerators all over the place.” There is talk of building a metal warehouse building in some green space the church owns behind its asphalt parking area.

This has not been free or easy. Pastor Denton spends a bit of each live broadcast on Wednesdays encouraging anyone watching to consider making monetary donations to the cause, and he said in an interview that he spends time during the rest of the week trying to add larger donations and line up new sources of donated food.

In January, Central Community welcomed its first large contribution from the Mormons, 20,000 pounds worth of canned goods and other foods grown on farms operated by the Latter-Day Saints. “Everyone at Central Community knows that I celebrate the opportunity to work with anyone who wants to share in love with those who need us most,” Denton said later that day. “And today I’m giving thanks that one of the largest food donors on the planet—the LDS—has come alongside us to help reach those in our community who need us most.”

Another major partner—and a long-term contributor—is the Feeding America program. “Some weeks we’ll get 10,000 to 20,000 pounds a week from them,” Eric Denton said. The result of all this legwork is that Central Community is usually spending $200 to $300 a week on food, even though they distribute more than 750,000 pounds worth of food each week.

A long lineup of cars is the norm at the church’s food distribution.

While Denton is fundraising each week, others from his church are also busy. Teams of volunteers stand outside as the cars arrive and help drivers check in and receive their food donation. Another team drives all over southern California to collect donated food from stores like Costco, Sam’s Club, and grocery stores. Last, but certainly not least, a team devotes its Tuesdays to sorting food into baskets for the next day’s giveaway.

Hard work in the service of those less fortunate is nothing new for this church family, a Church of God congregation in a working-class section of Riverside. Central Community also collects food and clothing for a weekly Sunday night outreach “on the streets of Skid Row” in Los Angeles, a project started thirty years ago that has never missed a Sunday since. The church also staffs and supports an orphanage they built in Tijuana, Mexico, in 2004 called Siempre Para Los Niños. It operates 24-7, year-round, with visits most Wednesdays by Rev. Denton.

That’s right, on Wednesdays, Denton hits the road right after the large-scale, now-regular food giveaway that happens outside his church and gets back home by early evening. It makes for some long days, but as he says with a chuckle, “Good things happen when I leave the office.”

Mark Butzow operates Mark My Words Ink, a freelance writing and editing service, and is a former journalism instructor, broadcast journalist, newspaper reporter, and copy editor. He lives in Madison County, Indiana, with his wife, a first-grade teacher at Liberty Christian School in Anderson.

Feature (top) collage: Other than these simple signs, the only other promotion of the Riverside food giveaway is Pastor Eric Denton’s extemporaneous reports using Facebook Live each Wednesday. 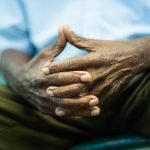 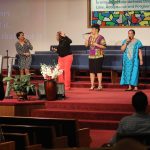