By chogministries
Posted March 14, 2019
In All Church of God
No Foolin’! Convention 2019 Illusionist Performs for Christ2019-03-142019-03-14https://www.jesusisthesubject.org/wp-content/uploads/2016/07/ChogLogo-Light.svgChurch of God Ministrieshttps://www.jesusisthesubject.org/wp-content/uploads/2016/07/ChogLogo-Light.svg200px200px 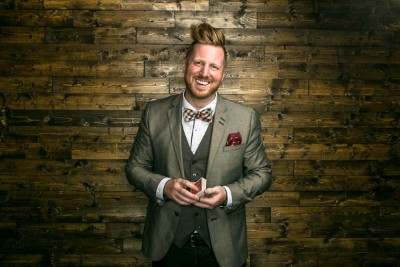 He was only four years old when he got hooked on magic. It was then that his father pulled a sleight-of-hand trick on young John Michael Hinton. The classic pull-a-coin-from-your-ear-then-make-it-disappear illusion was nothing short of mesmerizing, and it left an impression that proved providential. Today John Michael Hinton conducts magic tricks in packed auditoriums, fooling even the most well-known in the industry. Students who attended IYC last year in Indianapolis already know the jaw-dropping experience in store for Church of God Convention 2019 in Orlando. A behind-the-scenes look at the man behind the magic reveals an ordinary guy, who fakes the impossible, to point people to an extraordinary God for whom all things are possible.

John says he can’t remember a time when magic wasn’t a part of his life. Magic tricks were a hobby for his dad going back to when his dad was a child. “He passed it on to me,” John reflects. And John is glad his dad did, as making friends wasn’t always easy. “In addition to how cool it is to ‘do the impossible,’ magic also helped me with my peers…I found that it was often an incredible ice-breaker for relationships.”

Now one of the ways he “breaks the ice” in his shows is by asking a member of the audience to be his friend. After making someone crack a smile by agreeing to “be his friend,” John establishes a level of trust necessary for an unsuspecting audience member—suddenly processing the wide array of possible impossibilities that might or might not happen to them. More recently, John was able to add to his friends list two people he could have probably never imagined meeting when but a child. A year ago, John was selected to perform for world-famous magicians and entertainers Penn & Teller.

“Getting to perform on a stage that would be broadcast to millions of people has been a dream of mine since the day I learned my first illusion,” John recounts. “I grew up watching magicians like David Copperfield and David Blaine on TV and used that as an inspiration to hone my craft for the day I would get my chance!”

The goal of participants on Penn & Teller: Fool Us is to do as the title suggests. With decades of experience behind these “judges,” it might be a daunting prospect for most illusionists. But John Michael Hinton was most concerned about representing Jesus to the Las Vegas duo popularly known as the “Kings of Sin City.” 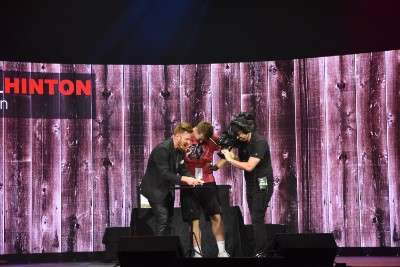 John Michael Hinton wows a student and the crowd at IYC2018.

“The whole process took six days with travel, rehearsals, filming the intro package, and then shooting the live performance in front of Penn & Teller. Everyone from the executive producers to the audio techs to the stage hands was so encouraging and fun to work with. Right before stepping out onto the stage, I remember peeking out from the wings (yes, even professionals do that!). I spotted Penn & Teller in their chairs, I leaned back, and I took a deep breath. I said a quick prayer, thankful for the opportunity…the stage manager gave me the sign that it was time to walk on stage. As soon as the bright stage lights hit me, and I saw the studio audience, I felt right at home.”

At home? For John Michael Hinton, no doubt. God created him for moments like this, to be on stage, to share his God-given quirky personality, all the while sharing his illusions and a positive message. 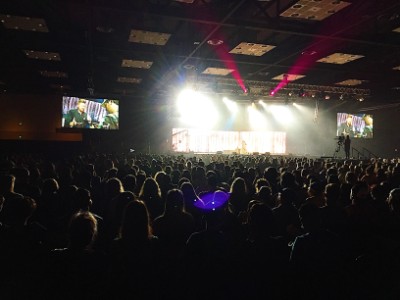 John feels “at home” under the bright lights, in front of a massive crowd.

“When I got off stage, I called my kiddos,” John continues. “They asked me how it went, and I told them, ‘I think I represented myself and who I represent well!’ My eight-year-old son asked, ‘What do you mean?’ I replied, ‘Well, buddy, my goal with everything I do is to represent Jesus. Whether I get to speak out his name or just do some fun things with Rubik’s Cubes. And I think I did exactly that.’ It was amazing to be able to do what I was created to do, and to show my kids what really matters.”

Of all the tricks John performs, he prefers the ones that utilize everyday objects. “If you see an illusion with a big fancy box and a dragon painted on it, you might not know how it was done, but you bet if you had the same big box, you could do it, too,” John explains. “In contrast, when you see something done with an Oreo cookie that seems impossible—well, the cookies at your house can’t do that!” 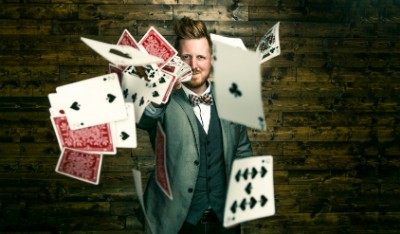 John has performed for a wide variety of audiences. As a result, he’s observed a wide variety of responses. Some are more colorful than others. “I do one trick where a person’s cell phone number is revealed at the end,” John explains, “and it’s always entertaining to see their mind melt: shock, horror, delight, dumbfounded expressions, yelling, unbridled laughter—I see it all! Once, during a different illusion, someone even screamed in shock and ran off stage while I was in the middle of the trick!”

Ultimately, as John as said time and time again, if his illusions earn him the right to be heard so the heart of God is what people remember, he’s done his job. And not only for unbelievers but also for Christians who have lost their sense of joy and need a smile that penetrates the soul. Joy is a trait John himself sometimes struggles with, but one he’s found to be directly proportional to how close with Jesus he’s walking. John cites John 15:1–12 when he concludes, “I was called to follow him and remain in him. I love how Jesus lands this whole concept with, ‘I have told you this so that my joy may be in you and your joy may be complete” (emphasis added).