For more than a decade, the prominent storefront along busy Montgomery Boulevard had built a reputation for the unwholesome. Even before the out-of-state owners of the entertainment chain opened its Albuquerque location in 2003, residents and tenants expressed concern over the inevitable consequences of a hub for nightlife in their neighborhood. A mile to the west, another thing was happening, not involving spirits, but the Holy Spirit. Ultimately the night club closed, and New Beginnings Church of God outgrew their building. Instead of breaking ground at the edge of town, the thriving congregation opted to remain in their community and reclaim the vacant storefront for Christ.

When Pastor Richard Mansfield started preaching the gospel on the south side of New Mexico’s largest city, they did their best to squeeze congregants into 1,200 square feet. What a blessing it was when they could stretch their legs in a 14,000-square-foot facility, during a season in which some of the most life-changing, course-altering ministries have emanated out of New Beginnings Church of God! Recovery programs, drug rehabilitation, homeless ministry, food distribution, statewide prayer efforts, and extensive ecumenical and civic partnerships have built for New Beginnings a reputation as a neighbor that residents can trust. Each year, the church gives away an estimated 120,000 pounds of food, but in a partnership with charity and other churches last year, New Beginnings Church helped distribute 2.1 million pounds of food over a five-month span. Given such broad community involvement, it shouldn’t come as a surprise that the mayor recently recognized Richard Mansfield (as the pastor of New Beginnings) an “ambassador” for Albuquerque, demonstrating the qualities these city officials want their city to be known for. 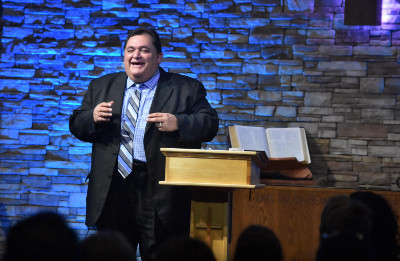 Pastor Richard engages the congregation with his dynamic and witty preaching style.

At the same time the church’s community involvement was growing, so was the ministry to children and youth. In fact, these programs were “bursting at the seams,” as Pastor Richard puts it. He continues, “We just didn’t have adequate building space to accommodate it all.” So, God provided a strip mall.

“I was driving down the road one day, turned into the parking lot, and began to look at this empty night club,” Richard recounts. “God told me to make an offer, and I did.”

But selling was out of the question, according to the listing real estate agent. Though the agent was resistant to communicating an offer other than leasing, Pastor Richard persisted. The sellers countered Richard’s $3.5-million offer, insisting the property was valued up to $8 million. Richard’s response was firm: “Well, if you’re interested in selling, call me.”

Just about nine months later, the seller agreed to the church’s offer. In the end, New Beginnings Church had almost 80,000 square feet on their hands, saved millions of dollars, and now enjoy millions in equity. Rent from the tenants has covered the church’s mortgage payment, and the tenants are pleased with the arrangement, too. Richard describes their sentiment: “They said, ‘You’ve brought life back to this place! It’s been phenomenal.” 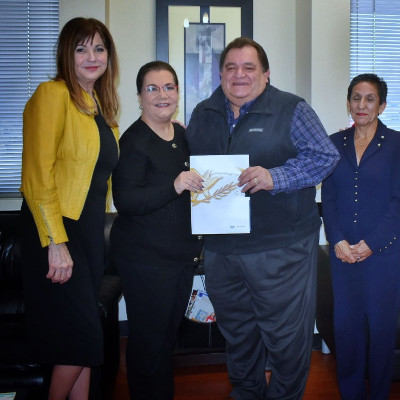 Pastor Richard at the signing over of the property.

Meanwhile the church has spread its physical presence across Albuquerque—including Spanish speaking churches (one of which meets in the original building on the south side), a predominantly Native American house of worship, drug rehab housing, a shelter for the homeless, and another English-speaking church on the far-east side of the city. New Beginnings Church isn’t seeking a bigger building; they’re seeking more souls for the Lord. That’s one of the reasons they couldn’t abandon their neighbors when they sold their old building. Richard cites the preponderance of apartment complexes in the neighborhood and the connection these residents have with New Beginnings. “We’re only a mile away from the old building,” he explains. “Now, instead of walking to the west, they just walk to the east.”

The church closed on the property on January 6, 2020. On the 26th of the month, the congregation celebrated in worship at the new, unfinished building. “We gave everyone a Sharpie marker,” Pastor Richard explains, “and told them to invade this place and pray out the spirit of lust and drunkenness, and pray in the Spirit of God. We asked them to write over every single wall the names in their family, the friends they would pledge to invite to church, and passages of Scripture. Like the crossing of the Jordan River, we said we were ‘crossing over to the fiesta,’ and not just because of the mall’s name, but because every time a soul is saved, there’s a party in heaven! We’re committed to leading our section of the city to the Lord, and make a dent in the world of darkness with the power of his light.”

It’s an all-too-common sight these days—a strip mall emptied of tenants, especially former grocery or department stores. Every day people pass by these mostly vacant lots with nary a passing glance, occasionally wondering if “this part of town” will ever come back to life. Though smaller businesses had remained strong at the Fiesta Crossings Shopping Center, the anchor storefront sat empty. New Beginnings Church of God not only filled the void, but also extinguished the darkness with the light of Jesus.

In the words of their pastor, God led them to turn a “night club into a Light club.”

Feature (top) photo: “Crossing Over to the Fiesta” worship service in the new, unfinished building in January 2020. 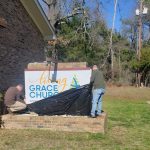 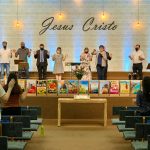