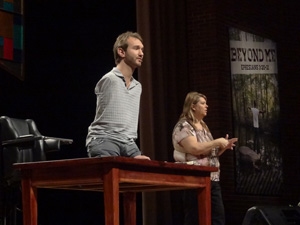 “Get out your notepads and pens, ladies and gentlemen!” A few peals of laughter rang out. “I’m going to give you some scriptures. Did you think I was joking about the notepads and pens?” The rustle of backpacks opening and notebooks being leafed through was audible in the room. What speaker could inspire Anderson University students to take notes in chapel? None other than Nick Vujicic, the Australian speaker and founder of Life Without Limbs.

Vujicic was born with a rare birth defect called tetra-amelia syndrome, which meant that he has no arms or legs. He has a small foot with two toes that he uses to operate his electric wheelchair and perform many daily tasks. As a child he often used a skateboard and used his foot to push himself around. He struggled with depression as a child, but as an adult he decided to use his unique life circumstance to preach to others a message of hope.

Vujicic, a pastor’s kid, grew up in the church. He felt like God’s only will for his life was to be healed. At ten years old, when his prayers for healing still had not been answered, he contemplated suicide, but the thought of his parents at his funeral kept him from going through with it. Five years later, he gave his life to Christ, and after college he began his work as an inspirational speaker through Life Without Limbs.

Vujicic also spoke to a group of high school students before his appearance in Anderson University’s chapel, and he spoke at Anderson High School twice on Saturday. His speaking arrangements in Anderson were set up by Proclaim, a nonprofit organization made up of several churches in the Indianapolis area. “When we have 30,000 invitations for me to speak, sometimes we just go directly to those invitations and sometimes we work through a coordinator,” said Vujicic. “We’ve had different invitations to Indianapolis before, but what we like to see are churches coming together.”

Vujicic has traveled the globe to spread the gospel through his unique circumstances. Despite the notoriety that he has gained through his speaking tours, he never loses sight of their real purpose. “I’ve spoken across 44 countries 2,000 times to five million people face to face, seen a half a million souls say ‘yes’ to Jesus, met seven presidents, and five congresses. I have 100 million YouTube hits and one billion people know who I am. One-seventh of the world knows something about my story. But all those facts can just be put aside. It’s the fact of knowing Jesus as Lord and friend, and learning and growing in that as I travel. It just never gets old, seeing someone say ‘yes’ to Jesus,” said Vujicic.

He has also learned not to let himself get burned out by speaking too much. “There’s a balance, you have to fill yourself up with God before you can give of yourself,” he said.

It was obvious from the packed auditorium and complete silence except for the sound of pens on paper that the students in chapel were inspired by Vujicic’s talk. When asked what he hoped they gained from his time in Anderson, Vujicic said just one word: “Faith. That’s it. Faith to pray. Faith to believe. And I pray they live as if they believe.”

To view a video of Vujicic’s AU chapel message, and to see the original article post, click here.