By chogministries
Posted December 3, 2020
In All Church of God, CHOG, Southeast, The Way
New Direction in Drexel: A Church Revitalization Story2020-12-032020-11-25https://www.jesusisthesubject.org/wp-content/uploads/2016/07/ChogLogo-Light.svgChurch of God Ministrieshttps://www.jesusisthesubject.org/wp-content/uploads/2020/11/drexel-pastor-appreciation-2018.jpg200px200px

Some efforts to revitalize struggling churches don’t succeed, but that’s not the case at Drexel’s First Church of God, which serves an area between Charlotte and Asheville in the North Carolina hills.

The church had been through a few down years and a few pastors “and it reached almost a broken point,” Rev. Jake Eldridge relates, sharing that attendance dropped from about 120 to 60 before help arrived. A team from Carolina Ministries (serving both North and South Carolina churches in the Church of God movement) visited to see if the church could continue.

The decision was made to try saving First Church, and a special team of pastors was appointed with a focus on church turnaround. Eldridge entered the picture and had help from the Carolina Ministries team for a while. Acknowledging that some steps toward turnaround happened before he arrived three-and-a-half years ago, Eldridge has brought some positive changes to Drexel.

“Their needs and wants, and my abilities, matched. It’s the key to what’s working there.” Eldridge says he has a different style of ministry than they were used to. “I’m super relational, not sitting in my office,” he says. “I’m a communication person and get out to talk to people. “They were not used to that,” but about three months into his tenure there, Eldridge said, they, too, became more social—hanging around in the lobby or standing by the pews and talking to others after services.

But his biggest contribution may have come from his business-oriented background.

Jake Eldridge grew up in Kentucky, the son of a dairy farmer who ran a feed business on the side and also pastored a church. That might explain the multitasking style Eldridge now exhibits. He became a pastor at his hometown church a week before his twentieth birthday and served several other Kentucky churches as a young man, most of that time working full-time jobs in sales. 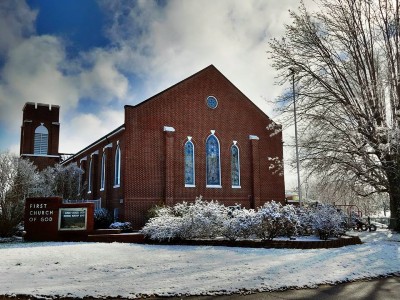 Eldridge began his first full-time pastorate in 2012 at Buffalo Church of God in Buffalo, West Virginia. During those years, he earned his ministry degree from Mid-America Christian University and has now begun work on a master of business administration degree from Crown College.

He took on his current assignment in 2017 at First Church in Drexel knowing there were challenges ahead. There were facility challenges—a wall crumbling in the back of the sanctuary, an asphalt lot in bad shape, and tired furniture from a bygone era. But there also were people challenges—a lack of accountability and tired ideas being recycled without much scrutiny.

About three months into his tenure there, Eldridge realized the board was saying yes to everything.

“I bring ideas early that aren’t necessarily thought through, you know. I need them to ask questions.” Recently, he pitched something to the board that they pointed out was straying from the “faith, family and future” focus of their mission statement. Progress!

Eldridge and church leaders have made difficult decisions, ending a “Breakfast with Santa” event that drew too few youngsters, and putting extra work into Trunk or Treat, which has drawn hundreds of youngsters the past couple of years.

From the start, Eldridge tried to build a rapport with those in his church, as well as in the community—“I needed to know what’s here, what y’all want and what the community wants”—and from that exploration came a collective decision to emphasize service to young families with young children. 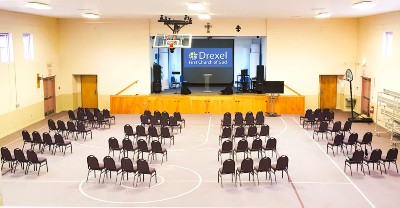 Worship is being held in the gymnasium to provide better social distancing measures during the pandemic.

First came a partnership with the principal of the elementary school, membership on the PTO, and ideas from town leaders on what was needed. The church operates a fair booth at a local carnival held two times a year, which brought a lot of visibility.

He talked with other pastors in the area and learned which churches were serving their community in what areas. Now, each September, Drexel First Church of God does an “Impact Week,” completing service projects around town.

“We’ve done landscape projects for the school, a painting project for the town, moved the pregnancy care center into our church building, cleaned out the Boy Scout hut at the community ballfields, and had children write cards to shut-ins.”

While there are still members of First Church in their eighties, there are also young families with children kindergarten and below. And that presented an opportunity to be of service to the whole community—and consensus to start up a daycare program for preschool and early elementary children.

Eldridge spent part of 2019 figuring out how to set it up and find qualified help. The Drexel Kids Development Center opened in January 2020. Then, when COVID-19 hit in March, Drexel Kids kept its employees paid and, after six or seven weeks, pupils started back. Today, at twenty-some kids a day, they are at capacity and have a waiting list.

The pandemic brought some other changes. A Wednesday night dinner has ceased, for now. Sunday services have moved from a second-floor sanctuary to the gymnasium. That spares Eldridge and volunteers from having to constantly disinfect stairway handrails and an elevator, and it allows visitors to spread out more for social distancing.

And during it all, the church board, Eldridge and the congregation keep focused on the new mission statement they developed: “Your faith, family and future empowered by Christ to make a difference.”

Mark Butzow operates a freelance writing and editing service, Mark My Words Ink, and is a former journalism instructor, broadcast journalist, newspaper reporter and copy editor. He lives in Madison County, Indiana, with his wife Lisa, an elementary school teacher at Liberty Christian School in Anderson. 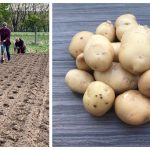 Ripe for Harvest: Catching Up with Canada’s East Side Church of GodAll Church of God, Change the Story, CHOG, Give Life 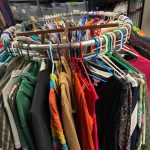 Riverside Church: A Trusted Neighbor of Oregon CommunityAll Church of God, Change the Story, CHOG, Give Life, The Way, Western