By chogministries
Posted June 3, 2015
In All Church of God, Global Strategy
New Book from Warner Press Explains Events in the Middle East2015-06-032015-06-03https://www.jesusisthesubject.org/wp-content/uploads/2016/07/ChogLogo-Light.svgChurch of God Ministrieshttps://www.jesusisthesubject.org/wp-content/uploads/2016/07/ChogLogo-Light.svg200px200px 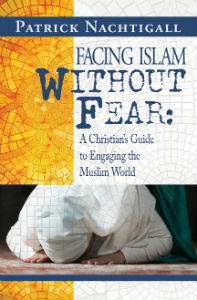 At Church of God Convention later this month, Warner Press will release a timely new book by cross-cultural missionary Patrick Nachtigall. Titled Facing Islam without Fear, the book covers the dramatic changes occurring in the Middle East and argues that Christians cannot live in fear of the upheaval occurring in the Islamic world.

The news media has become a very poor source for understanding the complexity of the Islamic world. “Most of us who have traveled, worked, or lived extensively in the Islamic world are struck by the friendliness of the people, their knowledge of politics and history, and the intellectual sophistication of many of the people we meet,” Nachtigall writes. The book breaks through the misinformation and simplistic analysis found in the media, but also forcefully argues in-depth that the rise of Islamic extremism indicates that Islam itself is in upheaval.

“Many of these troubles stem from Islam’s tension with secular political order and the modern world,” he notes. “We are not witnessing a ‘clash of civilizations’ as much as we are witnessing a clash within a civilization that is spilling out globally.”

In Facing Islam without Fear, Nachtigall introduces the basics of the Islamic faith, explains the underlying reasons for Islam’s current instability, and does not shy away from the militancy found in many forms of Islam. He discusses geo-political tensions, the terrorist threat, and Christian revivals breaking out. The book prepares Christians to engage Muslims—free of stereotypes, but with a realistic view of how Christianity differs from Islam.

A graduate of Anderson University and Yale University, Patrick Nachtigall is an emerging authority on the impact of globalization upon Christianity. His previous books on this subject include Passport of Faith (Warner Press: 2006) and Faith in the Future (Warner Press: 2008). He has traveled to more than seventy countries, lived on four continents, and his work over the past fifteen years has been based in the Middle East, Asia, and Europe.

Facing Islam without Fear (ISBN: 978-1-59317-794-2) will be available at Church of God Convention in Oklahoma City, June 22–25. Printed copies also will be sold at the Warner Press website (www.warnerpress.org) and Kindle e-books at the Amazon website (www.amazon.com), beginning on July 1. For more information, and to download a sample chapter of the book, visit http://warnerpress.org/books/facingislamwithoutfear.

Warner Press is a not-for-profit organization that publishes and distributes Christian products, including ministry resources, church supplies, kids’ books and greeting cards that equip churches for ministry and encourage individual spiritual growth. For more than 130 years, Warner Press has been sharing the gospel of Jesus Christ and serving the Christian community worldwide. For more information, visit www.warnerpress.org.