By chogministries
Posted April 5, 2013
In All Church of God
New Book Examines Women in Ministry2013-04-052013-04-05https://www.jesusisthesubject.org/wp-content/uploads/2016/07/ChogLogo-Light.svgChurch of God Ministrieshttps://www.jesusisthesubject.org/wp-content/uploads/2016/07/ChogLogo-Light.svg200px200px 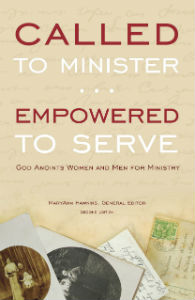 Warner Press, Inc., has published a second edition of the book, Called to Minister, Empowered to Serve, which examines the role of women ministers in the Church of God. First compiled for the 1989 National Consultation on Women in Ministry and Mission, the book has been thoroughly updated with current statistics and chapters by several of today’s leading ministers.

“There has long been a precedent for clergywomen in the Church of God,” general editor MaryAnn Hawkins writes. “It is a vital part of our DNA as a reformation movement. This affirmation of gift-based leadership, rather than gender-based leadership, is rooted deeply in our heritage and our theology.”

Called to Minister, Empowered to Serve includes chapters by Cheryl Sanders, Kimberly Majeski, Arnetta McNease Bailey, Kathi Sellers, and other leading women ministers of the Church of God. They reflect on the history of women evangelists and pastors in the movement, explore scriptures concerning women in church leadership, and consider how women ministers are vital to the future direction of the movement.