Never Underestimate the Power of a Congregation Challenged

By chogministries
Posted April 24, 2014
In All Church of God, Be Bold, Global Strategy
Never Underestimate the Power of a Congregation Challenged2014-04-242014-04-24https://www.jesusisthesubject.org/wp-content/uploads/2016/07/ChogLogo-Light.svgChurch of God Ministrieshttps://www.jesusisthesubject.org/wp-content/uploads/2016/07/ChogLogo-Light.svg200px200px 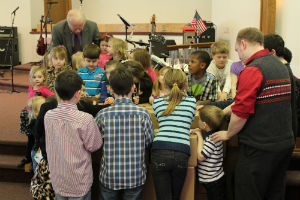 Photo: Pastors and children at Pekin First Church of God praying over the books for Yap.

When the Pekin First Church of God accepts a challenge, they accept it in a big way. While many congregations support missions, the central Illinois congregation has taken on the support of a missionary on every continent through the Living Link program. Now in its third year of raising funds, the Pekin First Church of God supports Dwayne and Kara Goldman in Australia, Jon and Karen Lambert in Ecuador, Ernie and Lori Nicholas in Kenya, John and Jodie Ackerman in Haiti, and Gary and Gwen Bistritan in Micronesia.

Recently, the Bistritans visited the church. As they shared their work and preparations to return, they told how, after more than twenty years of being based in Guam, they had moved to the island kingdom of Yap to help establish a Christian school. The great need was to teach the students to read and write English. The Yap government wanted its students to know the English language and was even encouraging students to enroll in the Yap International Christian School, directed by the Bistritans. The problem was that the school’s library was small and the whole country had few children’s books.

As Johnny Creasong, senior pastor of the Pekin First Church of God, closed the service, he looked into the faces of the children present and said, “I believe we could help that situation. I want the children to go home and pick out some books you no longer read and bring them for the children of Yap. In addition, let’s provide copies of Egermeier’s Bible Story Book (published by Warner Press) for the families of children as they pass from kindergarten to first grade!” Pastor Creasong thought that perhaps a couple dozen children’s books would be collected.

Never underestimate the power of a congregation challenged! One parent not only got books from home but also a large number of children’s books donated by The Hope Chest, a local thrift store. Some children brought books well-worn, but still intact, while others purchased new books. Two cases of Egermeier’s Bible Story Book rounded out the Yap book drive, for a total of 3,023 books that would be shipped to Yap.

The challenge of getting the twenty-seven boxes of books to Yap also appeared to be insurmountable. Once again, a challenge was brought to the congregation for funding to send the books. When the final count was made, more than three times the amount was given in just one week. Pastor Creasong said that he has never had to ask people to stop giving before! The extra funds will be sent to assist the Yap school in paying for customs and fees. While the shipment will take up to two months to arrive in Yap, the church’s donation will quadruple the size of the school’s library.

Gary and Gwen Bistritan serve as missionaries for Global Missions to Micronesia. CarolAnn North, who has served since late summer 2013, will conclude her assignment to Micronesia in late May 2014. For more information about Church of God missionaries and missions projects, visit www.chogmissions.org.