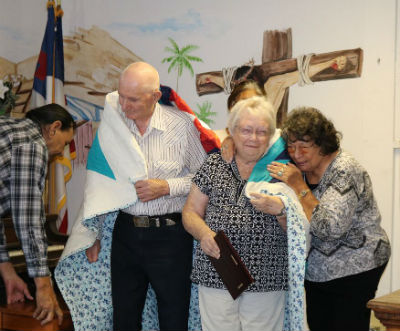 A touching moment for Paul and Kathy Bentley (August 19).

True heart for ministry is unmistakable. Combine that with a love for the Lakota people in Allen, South Dakota, and you have a recipe for a lasting impact. Such is the case with the combined thirty-two years of Native American ministry by two generations of Bentleys. Paul and Kathy Bentley, followed by Barry and Shelly Bentley, dedicated themselves to making a difference in a hope-deprived land among an impoverished people. As they pass the torch of leadership on to home missionaries Tim and Kim Wardell, we pause to bless the Bentleys and remember their steadfast service.

Paul and Kathy Bentley didn’t begin their ministry career in Allen. Pastoral ministry in New Mexico, Pennsylvania, Texas, Oklahoma, Minnesota, and finally Rapid City, South Dakota, highlighted the early days of their work. While working at a church in Rapid City, they began offering assistance to Linda and Butch Abold at Wounded Knee. FEWL—the Fellowship of Evangelical Workers among the Lakota—captured their attention. The opportunities for ministry among Native Americans there were as wide open as the countryside. One thing led to the next, as Paul and Kathy became involved with the American Indian Council of the Church of God. By the winter of 1985, they formally began their ministry in Allen, welcomed by temperatures at eighteen degrees below zero and freezing pipes! A ministry that first began in their house ultimately became a haven for adults and children alike.

“Paul and Kathy had a tremendous impact,” Shelly Bentley explains. “They were known as people who were always available—always. They were always there to attend a wake, funeral, wedding, and so on. The community knew them well; theirs was a ministry of presence. They did a lot of one-on-one with people. It was never an inconvenience to have a Bible study when only one person showed up. That one person mattered. That’s the kind of people they were.” 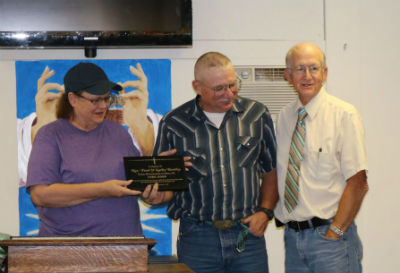 Sherman Critser (far right) presents Barry and Shelly Bentley with an award at the August 19 celebration.

And that’s the kind of people Barry and Shelly Bentley would become. Though Barry was born to Paul and Kathy in Texas, he met Shelly while his parents were doing ministry in Rapid City, the community where Shelly grew up. When the two got married, they never would have imagined the course God would have for them, nor the impact they would leave on Native American Ministries in the Church of God.

“Barry knew his folks needed some help,” Shelly recalls. “We were on the truck, traveling the country, and he decided it would be of help to their ministry. So, we went to Allen and got more and more involved in the ministry there. In a way, we just fell into it. That’s when we both became licensed. It was really a God-thing.”

Shelly had some prior experience working with Native American children through the migrant homeless program in the Rapid City school system. That would ultimately come in handy as she ministered to children in Allen, a task she considered anything but a chore. To adults and children, Shelly and Barry demonstrated God’s love in a way that was tangible. James Jackson, son of friends Charles and Kathy Jackson, experienced this love for himself.

“To be quite honest,” he explains, “if God were a person on earth today, Barry and Shelly would be the closest thing. I will remember most their care, their love, their passion for ministry.” 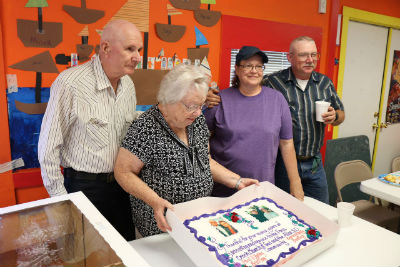 Paul, Kathy, Shelly, and Barry Bentley with their celebration cake.

Nikki Bauerle was one of many friends across the country who attended the August 19 remembrance celebration of the ministry of the Bentleys. The words of the associate pastor of First Church of God in Marion, South Dakota, help paint a picture of the impact of the Bentleys on the area. “I love the work that the Bentleys did in reaching the youth of the community,” she reflects. “I think real, intentional change will have to start with young generations and begin to grow with each generation that follows. The Bentleys have laid an amazing foundation of connections and relationships that are just the beginning of the work to be done in Allen. Their faithfulness has set the tone for future missionaries for years to come.”

In the years to come, Shelly Bentley’s prayer focuses on the need for spiritual “awakening” among the Lakota people, that “they would come to realize their need for Jesus Christ.” She explains that her prayer is also that “through the Wardells, the things that the Bentleys planted can bear fruit.”

As the Church of God continues to plant seeds of hope in Native American communities, Shelly encourages broad participation and engagement. “The Bible tells us to go to all nations and spread the gospel,” she reflects. “But you don’t have to go out of our nation to find a nation. The Lakota nation is a nation all its own. Throughout time, Native Americans have gotten a bad picture of Christianity. We can help change the Lakota nation and their outlook on what they often see as “white religion.” We can acknowledge them as people of equal standing and love them for who they are. We must be willing to do that, despite how hard it is here.”

Compassion. Understanding. Dedication. Love. These words and more only scratch the surface of the kind of impact the Bentleys leave behind in Allen, South Dakota. The Church of God is forever grateful. 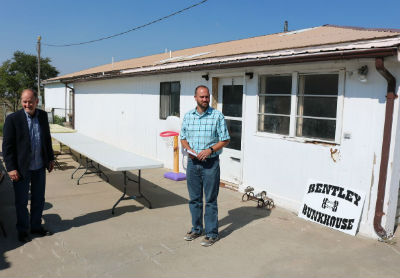 To contribute to the continued legacy of the Bentleys at work through Tim and Kim Wardell, visit https://give.jesusisthesubject.org/default.aspx?tsid=8168&fund=188941. Or you can mail your donation to Church of God Ministries, PO Box 2420, Anderson, IN 46018. Be sure to write Project 43.15585 on the memo line to assign your gift to Tim & Kim Wardell – Allen, SD Project. Thank you!