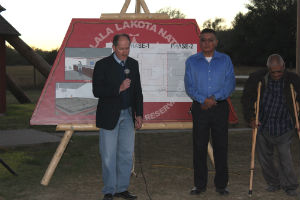 Photo: Ryan Chapman prays for the Place of Promise at a groundbreaking ceremony in September 2013.

Alcoholism, domestic abuse, and high unemployment are just a few of the issues that plague Native American culture in the United States. As if historical devastation and upheaval weren’t enough, today the communities that surround Church of God ministries on and near reservations deal with social ills that demand our attention. In recent years, the Church of God has taken steps to strengthen Native American Ministries. Next week, a team of Native American ministry leaders, advocates, and Church of God Ministries staff will convene in Rapid City, South Dakota, to plan strategically for the advancement of the kingdom on the home front.

“The needs out there are so urgent, with the huge percentage of unemployment, domestic abuse, and alcoholism,” Ryan Chapman, liaison to Native American Ministries, explains. “It is a fractured culture, and the folks there are simply overwhelmed by these needs that are present all the time. We’re trying to come alongside to encourage, strengthen, and give focus to some ways to address those needs.” A new advisory board will offer an organized solution for needed networking and accountability.

Attending the meeting will be ministry site leaders from each of the hubs of Church of God outreach in Native American communities—Ron and Maureen Woodman, from Klagetoh, Arizona; Sherman Critser, from Scottsbluff, Nebraska; Linda Abold and Don Mink, from Alliance, Nebraska; Stan and Sylvia Hollow Horn, from Wounded Knee, South Dakota; Emily Clark, from the Place of Promise at Wounded Knee; Shelly Bentley, from Allen, South Dakota; and Terry Packman, from Rapid City, South Dakota. Several other new and longtime friends and supporters of Native American ministry will also join Church of God Ministries staff members Ryan Chapman and Handel Smith in this new venture toward improved ministry and outreach.

While in Rapid City, the group will discuss ways to improve and enhance existing ministry, as well as considering fresh ideas. They will also spend a day training for the implementation of Celebrate Recovery—a highly successful and well-known addiction recovery program. “We believe that the strategic planning and the accountability and putting the minds together of all the folks who are there will take us to a new level of success in Native American ministry,” Ryan explains.

“My prayer for the meeting and the new advisory board is that all of us would have a sense of God’s favor and direction,” Ryan concludes, “as we develop what we discern to be his next steps for these ministry endeavors.”