By chogministries
Posted November 10, 2022
In All Church of God, CHOG
Native American Heritage Month: Celebrations and Opportunities2022-11-102022-11-17https://www.jesusisthesubject.org/wp-content/uploads/2016/07/ChogLogo-Light.svgChurch of God Ministrieshttps://www.jesusisthesubject.org/wp-content/uploads/2022/11/jonas-geschke-c8wjnvxmvui-unsplash_adj.jpg200px200px

In 1990, President George H. W. Bush formally approved a joint resolution designating November that year as a month to honor the vital history of Native Americans in the United States. Since the early 1990s, an increasing number of individuals, businesses, government agencies, and congregations have taken time in November to reflect on the contributions of Native Americans to innovation, culture, education, politics, and the church. Native American Heritage Month, sometimes known as National American Indian and Alaska Native Heritage Month, presents itself this year, and every year, as an opportunity for the Church of God movement. While much good has been done on the on the reconciliation front, concerning home missions, and reflecting local diversity at the local church level, there remains much to do.

From Arizona to Nebraska, from Washington State to Nebraska, several states have felt the impact over the years and across the generations of Church of God ministry to, by, and for the Native American demographic, covering a multitude of tribes. Even today, strategic and excellent ministry on the Pine Ride Reservation in South Dakota is carried out by Global Strategy missionaries, Tim and Kim Wardell. But among local churches, intersections with Native American families and culture mustn’t be overlooked. Many Church of God congregations, in fact, worship in relatively close proximity to reservations. Others minister in neighborhoods where Native American families live, work, and play.

Community of Hope is a Church of God congregation in Maricopa, Arizona, which has enjoyed several intersections with Native Americans over the past decade or more. With the Gila reservation to the north and the Ak-Chin reservation to the south and east, they’ve been enriched and challenged by getting to know such a beautiful culture.

“Growing up in Arizona,” Pastor Rusty Akers explains, “I have always known about all the reservations, but never really took an interest in who the people were. Living in Maricopa, I have had the chance to get to know many of the people. Our kids went to school with their kids, I have served alongside them in various forms, and I have come to really love the people.” 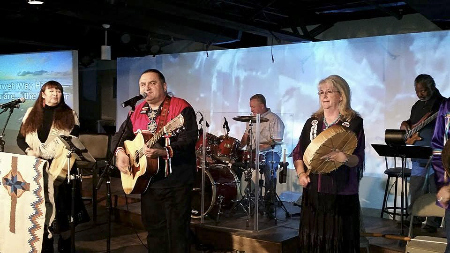 The Wildmans (RainSong) presenting music at Community of Hope several years ago.

“Terry’s book, Sign Language: A Look at the Historic and Prophetic Landscape of America, really began to reshape my faith and how important it is for us to work alongside, and try to understand our own country’s native people, including my own—a people who were severely abused and tossed away by those who came and settled it. [It also reinforced] the need for the church to seek reconciliation and relationship with them.”

Pastor Rusty wouldn’t say it’s been easy. Community of Hope has hosted several events, including Heritage Day, in an effort toward reconciliation with local Native American tribes. Sometimes the work has seemed to bear fruit, other times not as much.

“I really believe this is a long-term goal for the church at-large to continue to foster and build relationships with the native people,” Rusty explains. “They are very spiritual people, but are recovering from a tainted relationship with the people who invaded and conquered their land. The best we can do is educate ourselves on who they are, where they are spiritually, and do our best to connect with them personally.”

Pastor Rusty Akers recommends listening to and learning from the works of his late friend Richard Twiss, who he says was on the “front lines” of Native American ministry (www.wiconifamilycamp.org).

One state over, there’s considerable related activity going on at New Beginnings Church of God. Thankful he’s able to shepherd a flock that accurately reflects the demographics of New Mexico’s largest city, Pastor Richard Mansfield notes the ethnic diversity of the influential congregation. Hispanics (predominantly Mexican-American), Caucasian, African American, and Asian Americans are represented in worship week to week. But also represented are Native Americans, including, but not likely limited to, Navajo, Pueblo, Pima, and Apache.

One of the most potent ministries coming out of the Albuquerque church is its feeding program of massive proportions. Every day, volunteers serve between 350 and 500 people, offering both a hot meal and a food box to take home. Clothing distribution has been included in the ministry of God’s Warehouse, which offers such assistance to homeless and under-resourced residents. Across the street from God’s Warehouse is a social services agency meeting the needs of Native Americans for more than twenty-five years. In proximity to the center, God’s Warehouse of New Beginnings Church of God proves a trusted auxiliary resource for Native Americans in need. As a result, the church enjoys a “great working relationship with them,” Pastor Richard Mansfield notes. 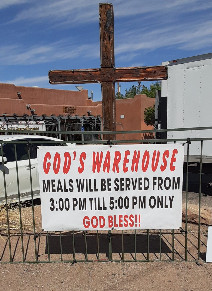 Within the congregation, a female minister of Pueblo ethnicity ministers intentionally and often to her people. Pastor Richard recounts the gripping story of a reconciliation event about three years ago that he joined with her to host. About 16 of the 20 governors (think chiefs or tribal leaders) of the respective tribes across New Mexico accepted the invitation to come together and be blessed by the New Beginnings leadership. Mansfield, a Mestizo himself (a Mexican American of Spaniard and American Indian blood), has long held a love for each culture and a desire to see reconciliation. Due to the atrocities committed in history by Spaniards against American Indians, an ongoing rift has separated people by race. But at the special event, each governor was offered a free meal and a special ceremonial blanket with cultural significance of honor and respect. Pastor Richard spoke at the event, and with tears in his eyes shared the story of his own unique experience in both cultures. In consideration of the atrocities in history committed by the conquistadors, Pastor Richard knelt and pled for forgiveness on behalf of part of his own heritage.

“The Spirit of God fell and they were weeping,” Richard Mansfield remembers of the momentous, meaningful occasion. He then recounts how one “medicine man” at the event, though initially closed to the possibility of real reconciliation, spoke to Pastor Richard after the ceremony. “He said, ‘I don’t know that I [accept your faith], but you have changed my whole outlook on you, your people, and even your God.’”

Mansfield and his Pueblo minister have since been invited to other events, including one in Gallup on the Navajo reservation, where the two preached messages of repentance and hope in Jesus. There, too, the Holy Spirit moved in mighty ways, bringing about varying degrees of forgiveness and reconciliation. Additionally, the Albuquerque church has been blessed to extend the reach of their feeding program to include the Church of God presence among Navajos at Klagetoh, Arizona.

Ministry in the Church of God to, by, and for Native Americans continues in several locations, though there remain many opportunities locally and collectively. Some opportunities knock on the doors of local congregations or the homes of Church of God pastors. Take Kermit Wilson, for instance, whose story of leaving sunny southern California for nontraditional ministry in Alaska was noted in a 2021 CHOGnews article. His story, continuing to unfold and needing to be told, has recently brought him into close proximity for impact among Alaska Natives. 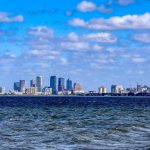 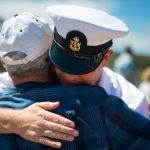