By chogministries
Posted September 5, 2012
In All Church of God
National Association Awards Smiths for Lifetime Achievement2012-09-052012-09-05https://www.jesusisthesubject.org/wp-content/uploads/2016/07/ChogLogo-Light.svgChurch of God Ministrieshttps://www.jesusisthesubject.org/wp-content/uploads/2016/07/ChogLogo-Light.svg200px200px 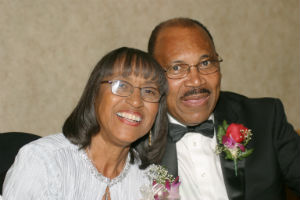 On Friday, August 10 at the Church of God Camp Meeting in West Middlesex, Pennsylvania, the National Association of the Church of God presented Rev. Dr. Reginald Smith and his wife Rev. Carol Smith with the Lifetime Achievement Award. The Smiths were recognized for thirty-two years of service in pastoral ministry, five in New York City at the Prophetic Church of God, and twenty-seven years at the Church of God of West Broward in Plantation, Florida, which they founded.

The Smiths retired from pastoral ministry in 2007, and now the church in Florida is now known as Praise Tabernacle International. Currently the church is under the leadership of senior pastor, Rev. D. H. Dawkins.

The parents of two adult children, one daughter-in-law and two grandchildren, Dr. Reggie and Carol have served the church at many levels of the Church of God—at the local, state, and national levels—including the Ministries Council, Florida Ministries, Florida State Association, and Warner University.

Many young parents, youth, and children have acknowledged a profession of faith through the many church and community outreach ministries established by the Smith’s ministry. The Smiths have also mentored a large number of pastors and youth who have matriculated at some of the nation’s finest institutions of higher education, many of whom received post graduate degrees, including PhD and medical degrees. In recent years the Smiths have continued to be models of pastoral and inspirational leadership, and are still active in resourcing churches involved with pastoral succession, as well as interim pastoral care.

The Smiths’ testimony is that they are humbled and in awe that God has chosen to use them as instruments of his kingdom, fulfilling the Great Commission.

Special thanks to the National Association of the Church of God and Florida Ministries for this story.