My Perspective on the Persecuted Church

By chogministries
Posted November 5, 2014
In All Church of God, Global Strategy
My Perspective on the Persecuted Church2014-11-052014-11-05https://www.jesusisthesubject.org/wp-content/uploads/2016/07/ChogLogo-Light.svgChurch of God Ministrieshttps://www.jesusisthesubject.org/wp-content/uploads/2016/07/ChogLogo-Light.svg200px200px

It’s been several years ago now, but I remember it like it was this morning. Travels on behalf of the Church of God took me to a country where being a follower of Christ comes at great risk and cost. My assignment was to speak from the Word, bringing a word of encouragement to about fifty people, all of whom were persecuted for their trust in Jesus. Under the cover of darkness I was led into an area populated by persons radically opposed to Christianity. I was humbled. What could I say in a situation like this? And honestly, I was more than a bit frightened.

As I was led into the area where worship had already begun, I was immediately overcome by a smell that left me instantly noxious. People in the surrounding area intentionally routed raw sewage into this area—the only area these people could find to worship. And the smell was overwhelming. We quietly sang a few songs, so as not to disturb the neighbors. One song was “sung” by everyone simply mouthing the words together. But the presence of God was unmistakable!

I spoke through an interpreter, sharing briefly from Isaiah 43. I felt so humbled, so honored to be in the presence of these men, women, and children who were committed to following Christ, even through persecution.

As I was ready to leave, a man smiled at me from across the room. His hair hung loosely—it looked like he had not combed his hair for several days. His smile revealed numerous missing teeth. His face betrayed a beard that had not been shaved for several weeks. As he walked toward me I was once again overcome by the smell and, being brutally honest (shamefully), I prayed silently, “Lord, do I have to kiss this man?” You see, in some parts of the world, kissing on either cheek is a greeting, and the thought of kissing this man was, well, the farthest thing from my mind.

He drew closer, and as he did it seemed as though God spoke to me and said, “David, what does a saint look like? You are about to meet one!” We not only greeted each other with a kiss, we also embraced, and I learned this man was the pastor of this small little band of Christians! Through an interpreter, I learned the reason he had no teeth was because they had been knocked out. His abusers not only knocked his teeth out, they broke his arm as they tortured him, forcing him to watch as his wife and daughter were abused. If only he would deny Christ, the torture would stop, he was told. “But,” he said, “I just could not turn my back on the Lord.” My guide was now pulling on my sleeve, telling me I must go, but I asked this pastor, “How can I pray for you?” His response was unforgettable. He simply said, “Will you pray for us? Will you pray that when our time comes, we will be faithful?” So the persecution continues.

For my safety, as well as for the safety of those in attendance, I was able to be with these Christians for about twenty minutes. Then I was led away.

In recent months we 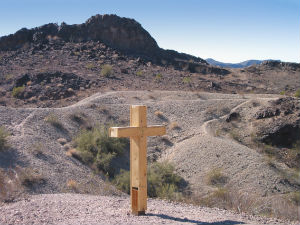 have been troubled and disturbed as we have read about Christians who are being persecuted for following Jesus. Men, women, children, and families brutally killed simply because they choose to follow Jesus, yet they refuse to recant their faith. We see it on TV. It’s in the newspapers. It’s everywhere. The torture. The cruel brutality. It’s being called the worst killing of Christians in history. According to World Net Daily, 176,000 Christians were martyred for their faith last year. That equates to 482 people who die for their faith every day. This means that across the world, one person dies every three minutes! In the amount of time it takes to eat an apple, to brush your teeth, or to sing a song, someone has given their life because they choose to follow Jesus.

God help us! November 9 is the International Day of Prayer for the Persecuted Church (also observed on November 2 by many churches). Then we will pray together, but will you pray today for those who live in places where it is dangerous to live for him?

The Word tells us that “the prayer of a righteous person is powerful and effective” (James 5:16 NIV). On our knees, let’s humbly pray—together.

Honoring Our Chaplains, All Veterans This NovemberAll Church of God, Chaplain Ministries
Beware Religion in Politics, or Politics in Religion? New Book from Warner PressAll Church of God