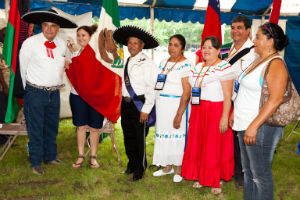 My Global Gathering story stretches back almost a year to an important meeting at Wesley Biblical Seminary in Jackson, Mississippi. I had made an appointment to visit the seminary to inquire about a rental for our state General Assembly meeting in February 2013. Ken Money took me on a tour of the building and discussed our needs and those of the other regular users of the building and grounds. As I described our organization, he interjected that his assistant was an ordained Church of God Minister from Mexico. He introduced me to a quiet young Hispanic man who did in fact confirm that he was Juan Gonzalez, from Saltillo, Mexico. During that meeting he told me how he had met his wife, the daughter of the vice president of the seminary, married, and moved to Mississippi to complete his master of theology. He was working for the seminary and taking classes at the same time.

During that first meeting, I questioned Juan about his involvement with the Church of God congregations in the Jackson area. He had not been in contact with any of them: work and school had kept him busy for the past year. I gave him my contact information and requested that he keep in touch with me, even come to Laurel to preach for me sometime.

It was not until our meeting that next February that I saw Juan again and then only in passing. At our summer camp meeting at Dixon Campground, Juan accompanied the Olde Towne Community Church as they led worship that evening. His father-in-law, Dan Burnett, had become the interim pastor for the congregation, so he tagged along. I was ecstatic. I greeted Juan warmly that night and found out that he had just graduated and would be trying to gain some additional status for work or service in the United States. He was uncertain of his future and mentioned the growing Hispanic population in the United States that needed to be reached with the message of redemption through the work of Jesus on the cross.

Something struck me that night. I had seen the requests from Anderson for those who would like to sponsor an international guest to attend the Global Gathering, and I knew that I could not have afforded the cost to sponsor a named delegate, but perhaps I could still help bring an international guest to the Global Gathering. I asked Juan if he was planning to attend. He replied that he was just finishing his work assignment and had little extra money for making the trip. “You really must attend,” I told him.

Our family always leaves a few days early to attend the Anderson meetings so that we may visit family on the way. Plus, though our vehicle will accommodate seven passengers around town, our trips to Anderson usually involve packing items for use at Kid’s Place, so we have our van packed to the top. I told Juan, “If you can make it Anderson, you can stay with my family, and I will try to find some expense money for you.” 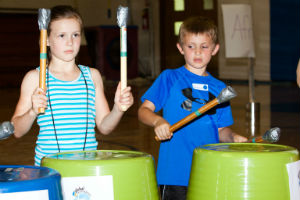 It took only a couple of days and Juan had sent me a message through e-mail. He  said he would love to come, but he needed help finding a one-way ride. It turned out that his wife’s grandparents live in Anderson and would be having a 60th anniversary celebration the week after Global Gathering. All of his in-laws would be in town and a ride home would be easily secured.

I called a couple of ministers from Mississippi who I knew would be headed to Global Gathering. Some were leaving early, as I was; others were leaving later. Finally, I called Brother Simeon Green of the Crossroads congregation just north of Jackson. His timing was perfect. He and his wife were travelling and had room for another rider.

When he arrived in Anderson, Juan stayed with my family at the Tara East Apartments on the Anderson University campus. We provided a place to stay, food, and a small stipend, just in case. By the end of the week, Juan had become a member of the family. We queried him regarding words in Spanish and got to know him better. He went with us as we visited friends and even came to see the Kid’s Place program.

Watching as people from all over the world came to greet Juan was a great thrill for me.  Many of them knew him from his work in Saltillo. One of his duties had been to 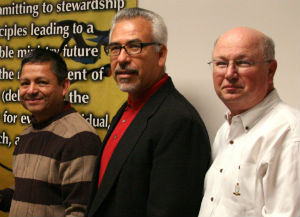 coordinate part of the Tri-S teams that traveled from Anderson University. He was able to reconnect with people who had been praying for him for years. Additionally, I saw him reconnect with ministers and family from his hometown. He was unaware of it, but his “uncle” was a member of the delegation from Mexico. In fact, at the moment of his arrival, a Hispanic pastor from Texas, originally from Mexico, greeted him and expressed that he had been thinking of Juan for potential positions in the States.

Perhaps the greatest joy came as we were introduced to Jim Johnman, liaison between Church of God Ministries and the Hispanic Council. Jim was extremely excited to meet Juan and immediately set about to finding a way for him to stay and serve in the effort to reach Hispanics in the United States. Jim was also knowledgeable about immigration laws and processes. This informed Juan about the path to Green Card status and a calling to religious employment in the United States. We met Jim on Sunday night. By Monday, he had identified one congregation that might want to interview Juan later in the week and knew of at least two state organizations that were interested in talking with Juan.

Global Gathering took on new meaning for me as I was able to see a global response to the needs of the fifty million Hispanics living and working in the United States. God was at work in me as he prompted me to sponsor a Church of God minister from Mexico/Mississippi to attend the Global Gathering. Then I was able to watch as God moved heaven and earth to encourage and confirm a call upon this humble man of God.

I can’t wait to see how God continues the work that he began in June 2013 at the Global Gathering of the Church of God.