Multiplication in the Midwest Changing the Conversation on Church Planting

By chogministries
Posted May 13, 2019
In All Church of God
Multiplication in the Midwest Changing the Conversation on Church Planting2019-05-132019-05-13https://www.jesusisthesubject.org/wp-content/uploads/2016/07/ChogLogo-Light.svgChurch of God Ministrieshttps://www.jesusisthesubject.org/wp-content/uploads/2016/07/ChogLogo-Light.svg200px200px 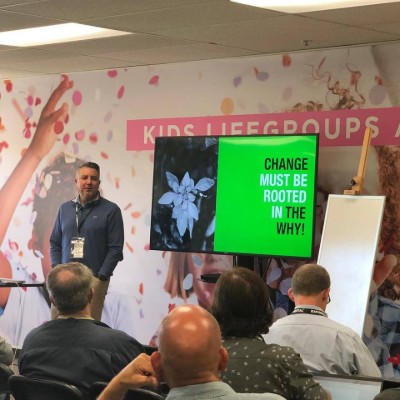 We’re simply not keeping up. Statistics show 4,000 churches are planted each year in the United States and 3,700 churches close. That leaves a gain of only three hundred churches. The overall population continues to rise, while the number of churches to reach people with the gospel lags behind. Perhaps now, more than ever, it’s time to change the conversation on church planting. That’s precisely what Tom Planck and Healthy Growing Churches are doing. The Church of God pastor and church planter is now actively pouring into the hearts of churches and regions to reverse a trend through basic math—multiplication. The numbers are starting to turn in their favor, as multiplication in the Midwest has captured fresh interest and mobilized existing churches like never before.

Before Tom Planck became the chief catalyst of Healthy Growing Churches, before he joined HGC, at all, he served Church of God congregations in various capacities. In fact, Tom’s roots grow deep in the Movement, having grown up in the Towne Boulevard congregation in Middletown, Ohio. In 1995, he planted New Life Church of God and, in 2006, Journey Church of God, both in the Cincinnati area. Through these experiences, God birthed a desire in Tom’s heart to inspire others to join him on the multiplication front. After all, to keep up with the population, multiplication—not simple addition—was going to have be the mathematical model going forward.

“I think multiplication has become a term that includes two things,” Tom explains. “Discipleship and reproduction. When researchers look at the statistics [highlighted above], they project the population growth and the mass exodus of young people from the church, then conclude that we’d need to plant at least 8,000 churches each year to meet the demand. We’re so thankful for ministries like Exponential, Acts 29, and other church planting organizations. But that’s not enough. We also need established churches wrestling with what it looks like for them to multiply. It’s not optional, either. When you read the Scripture narrative, it’s from Genesis to Revelation. God’s heart is for multiplication on an individual and a church level. The question isn’t should you multiply, but how you’ll multiply.” 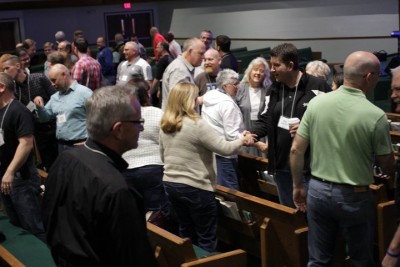 CHOG pastors greet each other at an HGC event.

Through cohorts and huddles (online meet-ups), leaders with a heart for multiplication help each other down the road toward multiplication. Healthy Growing Churches facilitates these clusters and events, resourcing the Church of God to trade stagnant-and-declining for healthy, growing, and multiplying! HGC also hosts gatherings at major events, such as Exponential, to further the multiplication conversation within the context of the Church of God movement. These events have been well attended and encouraging to anyone whose heart breaks for those far from Christ. All the while, Healthy Growing Churches partners with regional pastors, who play an indispensable role in catalyzing and accelerating church multiplication.

“When we were planting churches years ago, there was really only one resource,” Tom recalls. “It was ‘The Church Planter’s Toolkit,’ basically a bunch of audio cassette tapes on the subject. We spent years banging our heads against the wall, trying to figure it out. Now we’re providing resources and opportunities we never had available ourselves.”

Tom doesn’t even prefer to use the term “church planter” anymore, recognizing it as carrying baggage from the past. He describes it as being too “one-lane,” while multiplying has so many different lanes, everything from individual discipleship and mentoring—which isn’t happening nearly to the level it should be—to multi-site expansion and grassroots movements. “Parachute planting”—where a church planter and family are dropped off in a new town and try everything in order to see what sticks—can be time- , energy- , and resource-consuming—not to mention unsuccessful.

That’s one reason Healthy Growing Churches is celebrating today, especially, over what’s happening in the Midwest. Indiana, in particular, is witnessing a grassroots-initiated multiplication effort, hand-in-hand with Indiana Ministries and HGC, that’s taking the conversation to a whole new level. Crossroads 37 has the potential to bring about a wave of church multiplication that hasn’t been seen in the Church of God for a long time. Fresh expressions of church are emerging, creative methods are being employed, cross-cultural works are starting up, regional assemblies are getting involved, and Jesus is the subject. What could be better than that?

Learn more about Healthy Growing Churches, and discover opportunities to get involved, at www.healthygrowingchurches.com.